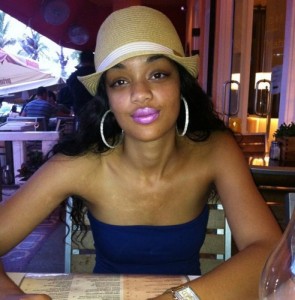 Simpson is being held at the Prince George’s Detention Center without bond. She turned herself in to Prince George’s County Police at about midnight after authorities believe she left campus after the assault.

Authorities say the Frazier, 18, of Washington, D.C., was fatally stabbed Thursday around 8 p.m. in the Christa McAuliffe Residential Community on campus, the school and police say.

Bowie State, which is celebrating Homecoming this week, has canceled all Friday classes while the investigation continues. A memorial will be held for Frazier at noon.

Maryland State Police have obtained a search warrant for the on-campus suite that Frazier and Simpson shared with two other students. The suite is being processed for evidence.

Greg Shipley, spokesman for Maryland State Police, added that police do not know what the victim was stabbed with. He also addressed rumors that the suspect and victim may have been fighting over an iPod; a rumor authorities are also checking into.

At about midnight, police say Frazier’s roommate, Simpson, of District Heights, turned herself in to Prince George’s County police. She is now in Maryland State Police custody, authorities say.

A preliminary investigation revealed that Frazier and the suspect were arguing in their suite when that escalated into a physical fight. Frazier was stabbed in the neck at least once, police say.

“I heard a bunch of girls screaming, I walked out into the hallway, went to the left, and I saw this girl, she was sitting on the floor, she was (covered) in blood,” said Donovan Settles, who was visiting friends at the school. He said when he saw the girl, the left side of her body was covered in blood.

Embarking on the 1 Year Anniversary of Bowie State Stabbing