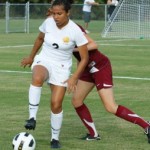 The Offensive Player of the Week is Silvia Fuentes (Moreno valley , Ca.) of Arkansas-Pine Bluff. The 5-5 senior had a goal and three assists against the University of the Ozarks and an assist against southern Mississippi, totaling six points for the week. She earned a spot on the Mississippi State Bulldog All-Tournament team.

Kaitlin Morin is the Defender of the Week. The 5-11 sophomore from Sue Saint Marie, Canada. She was a key player on defense, taking Mississippi State to overtime in 1-0 loss and Southern Mississippi 2-1. Morin also had played key role on win over Ozarks 5-1.

The Keeper of the Week is Olivia Wood sophomore 5-7 from Cambridge, Canada had six key saves against Mississippi State. She got her first win of the season against Ozarks.