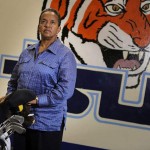 (Courtesy of The Tennessean) – Catana Starks had played rounds of golf only for fun when she was asked to recruit and coach Tennessee State University’s first men’s golf team.

The school was joining the Ohio Valley Conference in 1986 and, as part of the move, decided to drop the men’s swimming and diving teams Starks was coaching.

Over the next 17 years, she often drove the golf team to competitions. She even stopped at an outlet mall once and purchased suitable uniforms. Starks had grit. She hung out with area golf pros and became determined to make her players the best golfers in the nation.

The Hollywood-ready story of America’s first African-African woman to coach a NCAA Division I men’s golf team is being told in From the Rough, with a screening at the Nashville’s International Black Film Festival on Oct. 5. Taraji P. Henson, an Oscar nominee for The Curious Case of Benjamin Button, stars as a fictionalized version of Starks named Cassandra Turner.

Starks, 66, says the movie portrayal is humbling. She hopes it’s a recruiting tool for TSU to attract more students — even some golf talent.

“It’s an honor to be respected that way,” she said. “The movie was tastefully done. I think it portrays what I am trying to convey to other African-American females: You can coach men’s sports and be successful.”

Former TSU golfer Sam Puryear, now director of golf at Queens University of Charlotte in North Carolina, says the recognition is long overdue. He was recruited to TSU’s golf program in the late 1980s.

“When I first got there, she didn’t know anything about golf,” he said. “I watched her develop in golf, and she was learning the game and putting people and things around us, for what she didn’t know.

“A lot of what we learned on the golf course was life lessons that I still carry with me now. I learned a lot of mental toughness from her.”