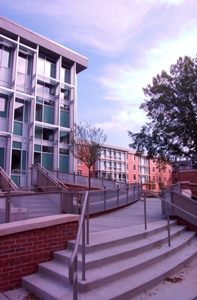 Chidley North Residence Hall will be officially unveiled at 11 a.m., and a ceremony for the yet-to-be-named nursing building will follow at 11:30 a.m. Both facilities opened Aug. 22, but the formal openings were delayed to give students a chance to settle into the fall semester.

“These new buildings are a source of pride for everyone on campus, and we hope the community feels the same way,” Nelms said. “NCCU is a world-class institution, and our students and faculty deserve world-class facilities”

Chidley North is named for the Rev. Howard Chidley, a Congregationalist minister who was a close associate of NCCU founder Dr. James E. Shepard. The spacious hall is home to 517 juniors and seniors, mostly in double rooms with a single bathroom. There are eight corner suites that house four students each. The 135,000-square-foot hall has a large laundry, kitchen and study room on each floor. There are lounges in every wing, a classroom and computer lab on the second floor, and Wi-Fi throughout.

The hall, at the corner of Alston Avenue and Lawson Street, cost $30 million. It was built adjacent to the original Chidley Residence Hall, which is closed for renovation.

The $25 million nursing building, on the former site of Holy Cross Catholic Church along Alston Avenue, is designed to meet the needs of a rapidly growing nursing baccalaureate program. The building boasts 69,000 square feet over three floors. The first floor has three classrooms, including a 203-seat auditorium and two 72-seat classrooms, a student services section with a grab-and-go food service, and a student lounge. The lobby can accommodate 360 people for receptions.

The second floor has a 62-seat classroom, simulated hospital rooms and rooms containing computer-controlled mannequins and robot “patients” for student testing, and quiet study and group-study rooms and locker space. The third floor is mostly offices for faculty and staff.