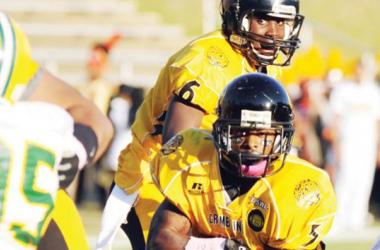 Doug Williams and his coaching staff called a late audible Saturday, inserting his son D.J. Williams in at quarterback for an overtime period after a solid performance from starter Frank Rivers.

D.J. Williams called an overtime audible of his own, opting out of a second down run play and hit senior receiver Mario Louis for a seven-yard touchdown to give the Tigers a 30-24 overtime win over Mississippi Valley State before a homecoming crowd of 11,137 at Robinson Stadium.

After MVSU missed a field goal in overtime, GSU took over with Dawrence Roberts rushing for 10 yards on first down and gaining extra yard on a personal foul penalty against the Delta Devils. Doug Williams said he wanted to stay conservative and go for the field goal, but his son had another option in mind when he came to the line of scrimmage.

“I saw the best receiver in the (Southwestern Athletic Conference) with one-on-one coverage and called the audible to him,” D.J. Williams.

Louis, who also plays basketball for the Tigers, went high for the seven-yard scoring reception – his third of the game – going up over a MVSU defender to pull down the ball as the Tigers stormed the field in celebration.

“This one was for the alumni,” D.J. Williams said. “Coach had talked about it all week — we have to bring our fans back and that meant putting on a good show and getting a homecoming win. When I saw Mario with the one-on-one coverage, I knew right then we had it. All I had to do was the put the ball up there and he’d go get it.”

The win put the Tigers back into the SWAC Western Division race at 2-3 while the Tigers moved to 3-4 overall. MVSU fell to 0-8 and 0-7.

Grambling’s come-from-behind stunner overshadowed a furious effort by Mississippi Valley to push the game into overtime. MVSU tied things up with no time remaining as quarterback Garrick Jones ran right, lofting himself high into the air and reaching the ball over the pylon in the right corner of the end zone for the score. Valley kicker Carlos Sanchez’s PAT kick was a knuckleball but barely cleared the crossbar to push the game into OT.

Rivers played a solid game, hitting on 14-of-23 passes for 211 yards with scoring passes of seven- and 57-yards to Louis. But when overtime rolled around, Doug Williams and Co. decided to roll the dice.