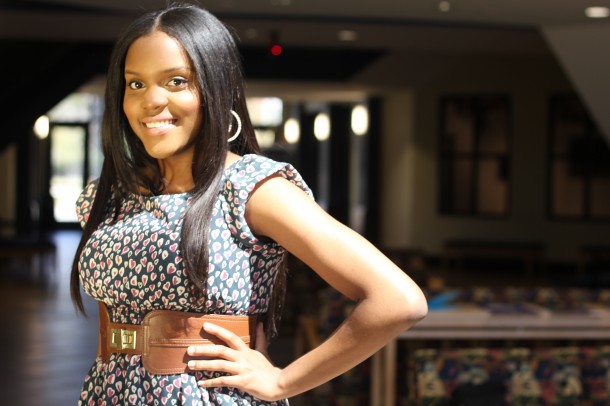 “I believe style is all about self-expression and how you want to present yourself to the world,” says Danehsia Ferguson. Our Stylish Buzz of the Week states that it’s safe to say that her style is “Effortlessly Glamorous.” She adores classic feminine pieces that accentuate her silhouette.

“For me this fall, it’s all about playing up muted shades,” said Ferguson.

Currently, the sophisticated fashionista inspiration is Kourtney Kardashian and Angela Simmons.  Ferguson feels that these two ladies have a way of inexpensive pieces and making it look like a million bucks!

This season, Ferguson’s closet consists of blazers and coats from consignment shops such as the Goodwill & Plato’s Closet.

“It’s a great place to find a classic look while saving a pretty penny,” said Ferguson.

What sets Ferguson apart from any other “fashionistas” is that she is not a fan of quick & current trends. For her it’s all about playing up the basics (the pencil skirt, the dark wash jeans, and the little black dress).

Style is not the only thing Ferguson has to show for; she has the beauty along with the brains. She is a Student, blogger, event planner and journalist with dreams that stack higher than the New York skyline. Ferguson is constantly searching for balance between college and making her dreams into reality.

Her mission is to become a premiere urban journalist by age of 25. As of right now, she is a Public Relations major at the prestigious Savannah State University and an intern for Emmis Communications (HOT 97FM).

Ferguson lives by the motto; “Things may come to those who wait, but only things left by those who hustle.” -Derek Blasberg.