While playing a Jackson State, Hunter scored 2,226 points and is second only to former NBA player Purvis Short in the JSU record books.

In the summer heading into his senior season, Hunter would spend numerous hours in the Lee E. Williams Athletics and Assembly Center shooting jump shots, performing passing drills and working on his ball handling skills by weaving between chairs he placed on the gym floor.

During his senior year, he averaged 26 points per game, making him the fifth best scorer in the nation and the Tigers won the SWAC regular season championship. Hunter was also named an All-SWAC performer as well as being invited to the All-SWAC Tournament team in 1992 and 1993. 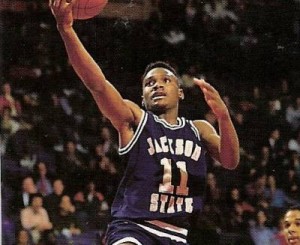 His most remembered moment was leading the Tigers past the Huskies of U Conn in the 1993 National Invitational Tournament. According to various reports, head coach of the Huskies informed his players that no lead would be safe against Hunter and Jackson State. Scoring only five points in the game’s first half, Hunter quickly found his rhythm and finished with 39 points in the 90-88 victory over U Conn. He scored 9 of JSU’s 10 points in overtime.

After Hunter’s collegiate career, he was selected as the 10th overall pick in the 1993 NBA draft by the Detroit Pistons. He would go on to play 14 seasons in the NBA with the Milwaukee Bucks, Los Angeles Lakers, Toronto Raptors, Detroit Pistons and the Chicago Bulls. He also won two championships; first with the Lakers in 2002 and the second with the Pistons in 2004.