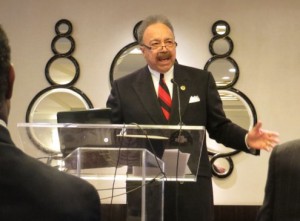 Moniz made the announcement in a speech to students and faculty after touring campus. He visited Jefferson Lab earlier in the day.

His trip to the Peninsula followed the State of the Union speech Tuesday where the president touted an “all of the above” energy policy. However, Moniz said that generalized approach must still take into account climate change and carbon dioxide emissions.

“We must support the development of the technologies and the policies that will allow all of our fuel sources to be competitive in a future low-carbon environment,” he said.

Moniz, a nuclear physicist and former professor at the Massachusetts Institute of Technology, visited HU’s Proton Therapy Institute and met with a select group of students, whose majors included physics, mathematics and biological sciences, before addressing the larger group. Read more at Daily press