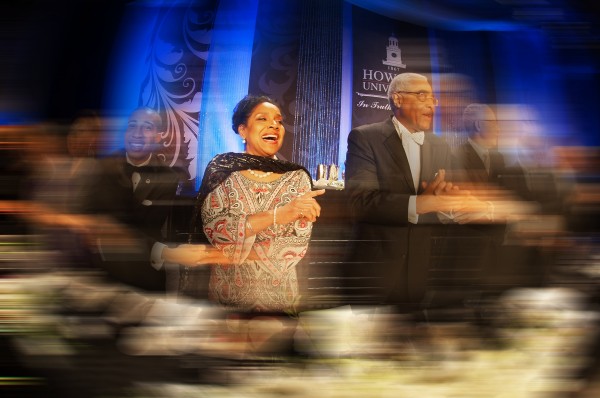 Hey isn’t that… Tony Award-winner Phylicia Rashad belting out her school’s alma mater at Howard University’s 90th Charter Day dinner at the Washington Hilton on Saturday. Rashad, and all her regal glory, was on hand to celebrate the university’s 147th birthday, which felt like a fancy version of Howard’s famous homecoming with a massive crowd of 1,700 barely able to sit still long enough for the four-courses. There were just too many people to say hi to or pose in a black-tie selfie with.
Whether announcing the night’s next alumni award recipient or telling “the owner of a Nissan with Pennsylvania plates” to move their car, Rashad, who served as the mistress of ceremonies, kept the crowd enamored with her every note. “I could listen to her talk all day,” whispered our tablemate in all seriousness. Before blowing out the candles Howard announced two major gifts totaling $8.9 million. Happy birthday, indeed. Referenced