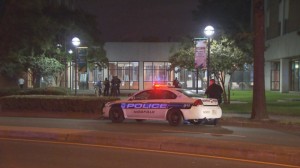 Police were called to the 7-Eleven parking lot at around 3:15 a.m. Monday morning, October 13. That’s located at Park Avenue and Brambleton Avenue.

Crews arrived on scene and found the victim, a Norfolk State University student, suffering from a gunshot wound.

The victim was transported to Sentara Norfolk General Hospital with what appears to be a non life-threatening injury.

Police were told that the victim and another NSU student were sitting in a vehicle in the parking lot of 7-Eleven, when two black male suspects approached their car and displayed a gun. The suspects took personal property and money from the victims, police say. The suspects then shot the first victim and assaulted the second man before fleeing from the area.

The second victim sustained non-life threatening injuries and was treated on scene by paramedics.

The victims are both freshmen, according to Norfolk State University officials.

A campus announcement was sent to faculty, staff, and students to inform them about the incident. “The campus is safe and is operating as normal,” officials told NewsChannel 3 in a news release. Norfolk State University Police are assisting the Norfolk Police Department in the investigation.

NSU students do not have classes on Monday; they are on fall break.

Norfolk Detectives are currently investigating this robbery and shooting, and anyone who may have information about this incident is encouraged to call the Norfolk Crime Line at 1-888-LOCK-U-UP (1-888-562-5887). Any information that leads to an arrest can earn a reward of up to $1,000.

The following message was sent to faculty, staff, and students of Norfolk State University: