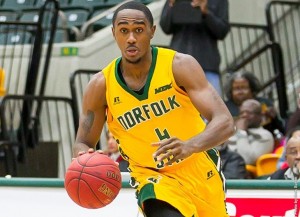 NORFOLK, Va. – Juniors RaShid Gaston and D’Shon Taylor led the way with double-doubles, and the Norfolk State men’s basketball team pulled away from Coppin State in the second half in an 88-69 MEAC victory on Monday night at Joseph Echols Hall.

Gaston posted his fifth straight double-double with 19 points on 9-of-13 shooting to go with 13 rebounds and three assists. Taylor led all scorers with a career-high 24 points on 9-of-15 field goals, including a 5-of-7 effort from the 3-point line. He also posted 10 rebounds, three assists and two blocks.

The victory moved NSU’s record to 2-0 in conference play and 6-4 overall heading into the rest of the non-conference schedule. CSU fell to 1-7 overall, 0-2 in the MEAC.

In a game that featured a lot of quick back and forth action, including a combined 27 fastbreak points, the Spartans had their highest scoring output over Coppin State in a regulation contest in 31 games. CSU came into the game dead last in the nation in scoring defense.

NSU was up by as much as 14 in the first half before the Eagles cut the deficit to five at the break. That Spartan lead shrank to just two in the early part of the second half.