COLUMBIA, S.C. – The best women’s basketball team in Savannah State history concluded their season Friday night with a 81-48 loss to South Carolina in the first round of the NCAA Tournament.

The Lady Tigers end with a Division I program best record of 21-11 overall. They are the first SSU basketball team to earn a Mid-Eastern Athletic Conference championship.

On their championship run they went on the school’s best Division I winning streak of 11-games. It was the program’s second best win streak.

Friday’s game was a lopsided matchup with the No. 1 seed South Carolina – a team that had only two losses in the regular season, cruised to their first Southeastern Conference title, were ranked No.1 in the country for 12 weeks, and beat Savannah State by 62 points this past December.

However, on Friday the Savannah State team that walked into Colonial Life for the second time this year was not the same team.

In their first matchup, South Carolina led SSU 60-22 at the half. On Friday, the MEAC Champion Lady Tigers trailed by only 13-points at the half.

[quote_box_center]“I thought coming into the game today we had a pretty decent game plan,” SSU head coach Cedric Baker said. “I want to commend my student-athletes, we put in an offense within a matter of five or 10 minutes today that I thought, for a half, put us in a position to keep it respectable.”[/quote_box_center] 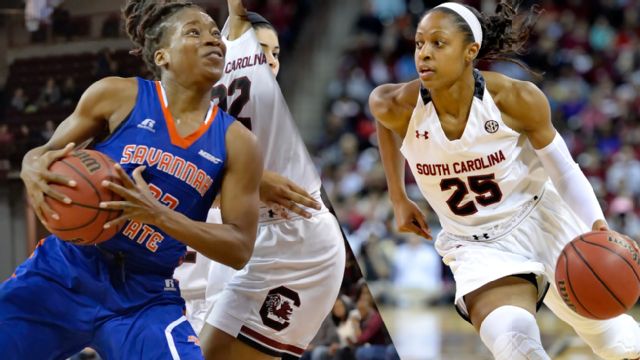 In front of a crowd of 10,644, a fast paced game opened with teams trading point-for-point. Aleighsa Welch broke a tie-game with a fast break layup, and redshirt senior Ezinne Kalu answered with a 3-pointer to give SSU their only lead of the game, 7-6, at the 17:01 mark.

South Carolina opened a short run over the next two minutes to take a lead they would not relinquish for the rest of the game.

SSU played the Gamecocks tough in the first half though. With 3:59 to play, Jasmine Norman, Kalu and Tiyonda Davis opened a 7-2 run to cut the Gamecocks lead to only eight points.

USC fired back though with a 7-2 run of their own to close out the half.

South Carolina shot a mesmerizing 72 percent from the floor in the opening half, hitting 18-of-25 field goal attempts, and 3-of-4 3-point attempts. Kalu led the field at the half with 12 points.

The second period was a different story as South Carolina’s deadly post work showed up in force, and the size mismatch with Savannah State came into play.

The Gamecocks scored 56 of their points in the paint, handing SSU a dose of their own medicine.

“They’re probably the most fundamentally sound post players we have seen all year,” Baker said. “Typically, in our half court sets, we try to really dig in on the one dribble from the post players but [I] want to commend the post players of course [Aleighsa] Welch, of course [Alaina] Coates and also Asia Dozier. When they got inside, they kept it hot and we’re pretty small, so we have to utilize our speed and quickness so they kept it hot and wouldn’t allow us to dig in and get any steals and get out in transition.”

Over the season, the Lady Tigers averaged 34.7 points a game in the paint. Against South Carolina, they managed only 20 points. They were outscored 38-18 in the second period.

“At the end of the day, you’ve got to play with a lot of passion, which I thought we did,” Baker said. “We had poise there and some intellect for most of the game but I thought we got out of character there which, of course, against good basketball teams, every possession is different. This is new for us, and I feel sorry for the seniors because they won’t get another shot at it, but just looking at our program and how far we’ve come, I’ll say to you I think we’ll be back.”