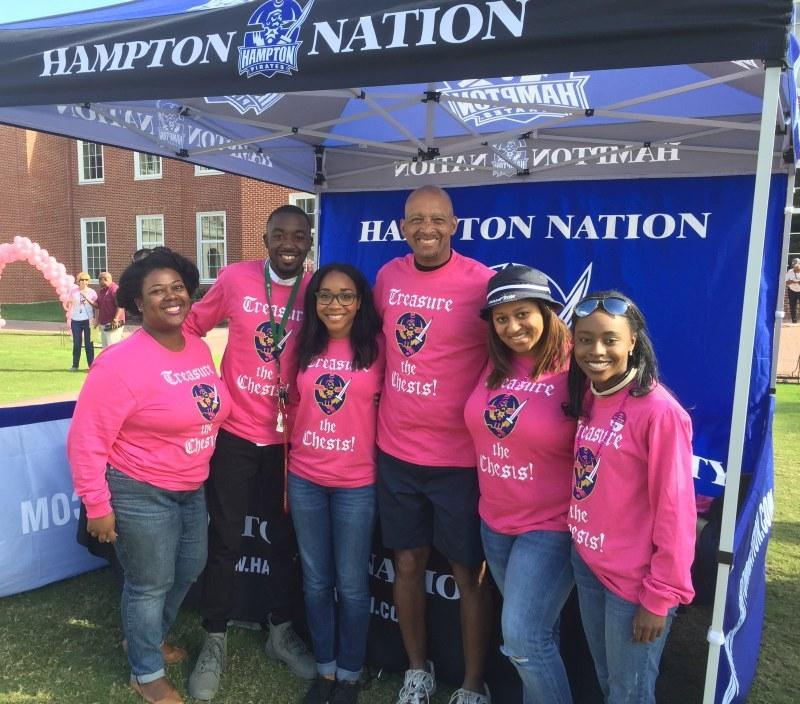 The three departments donned pink and ultimately made impactful strides with over 2,500 other participants at the Making Strides Against Breast Cancer event at Christopher Newport University on Sunday, October 11, 2015. The noncompetitive, three to five mile event celebrates breast cancer survivors, raises awareness about the disease, and raises money to help the American Cancer Society save lives by funding groundbreaking breast cancer research.

The fellows made Hamptonians proud as they epitomized the essence of President Harvey’s Leadership model, which exemplifies a commitment to community service and service learning. Fellows proudly boasted logo-stamped pink T-shirts with a message focused around the HU pirate, calling for all to Treasure The Chests, to bring attention to the women fighting breast cancer and to tell the world that HUPTI is fighting breast cancer with protons.

The event was saturated with smiles, laughter and pink as thousands of survivors and supporters for a cure grasped hands to form an enormous pink human ribbon, dance the Cha Cha Slide, and pose in pink face paint. Leadership Institute fellows from the Scripps Howard School of Journalism and Communications (SHSJC) snapped candid photos and posed the question, “How do you Treasure the Chests?” to striders during impromptu interviews. One of the striders featured was none other than HUPTI’s Executive Director, Keith Gregory. “I am so grateful for the assistance of the William R. Harvey Leadership Institute fellows for participating in this event on behalf of the Hampton University Proton Therapy Institute. It is very important, particularly for young African Americans, to be informed when it comes to this disease,” said Gregory.

Many of the sponsors and individuals in the Making Strides event raised funds for cancer research. HUPTI graduate and ambassador, Janet Weymouth-German, in partnership with her team The Breakfast Club who also participated in the day’s festivities, raised over $12,200.000. With Weymouth-German contributing $1,494.00 of that amount single handedly.