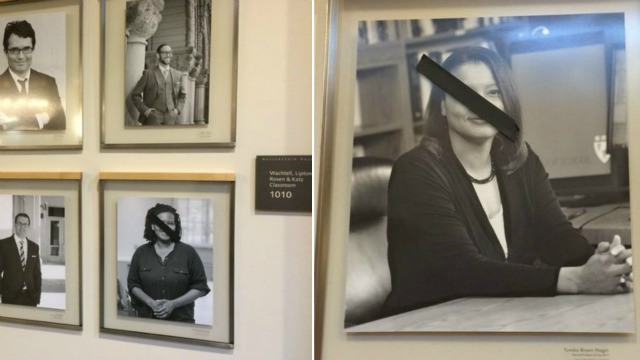 Harvard students rallied in support of college students around the nation who have been protesting for racial justice. The very next morning, the faces of every black professor at Harvard Law were marked with black tape.

Harvard PhD candidate Clint Smith tweeted out pictures of the marked pictures, showing the slashes of tape across the professors’ faces.

Leland Shelton, the president of the Black Law Students Association, said that the black tape marks were likely hostile action, saying that it “wasn’t done by an ally. It wasn’t in support of black students and black professors.” Shelton also said that he started to receive concerned texts from fellow students early Thursday morning when they discovered the marks in the main building.

On Wednesday, students had staged a walkout to show solidarity with students protesting in universities like University of Missouri and Yale, and they were joined by some school faculty, such as University President Drew Faust and Dean of the College Rakesh Khurana.

One of the demands made by Harvard protesters was a change to the school’s official seal. As it is, the seal features the crest of Isaac Royall Jr., who helped found the school but was “a coward, and a brutal slaveholder,” according to research done by a visiting law professor.