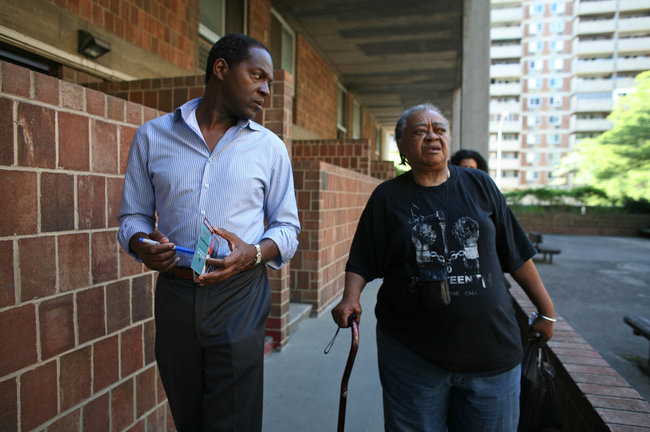 It was an honor to interview Clyde Williams. He announced his candidacy for New York’s 13th Congressional District in October of 2015. He was the recipient of the Harlem Business Alliance’s Community Service Award in 2003. In 2009, President Barack Obama appointed Williams as the Political Director of the DNC. He is married to former White House Deputy Chief of Staff Mona Sutphen. Lastly, he graduated from Howard University with a degree in political science.

Robert: You are a Howard grad! How has being a Bison been helpful to you in life?

Clyde: I loved my time at Howard and continue to have a soft spot for that school. Attending Howard really changed my life and provided me with opportunities and a belief in myself. If you think about some of the people that have gone to Howard or have been affiliated with the school – people like, Thurgood Marshall, Dr. Charles Drew, Ed Brooks, and Sharon Dixon, among countless others – the school has an important historical significance and legacy that not many schools have. Attending Howard gives you an opportunity to build on that legacy. Attending Howard was a special time in my life and an experience I have really valued.

Robert: What do you think the role of HBCUs are in the world?

Clyde: It’s important to remember the historical role that these schools played for the African American community in American history, offering young Black men and women an opportunity for higher education that they otherwise would not receive. These schools gave people the ability to better themselves when other universities wouldn’t. Some of the best and brightest minds in society today are from these institutions, and these schools played a critical role in helping mold them as individuals, and will continue to mold the future leaders of our society. HBCUs have played such an important role in this country’s progress in the past, and I think that will continue to be the case in the future.

Robert: Talk about your time as Political Director of the Democratic National Committee. What did you learn? What did you bring to the position?

Clyde: I was appointed as Political Director of the DNC by President Obama to help further advance the Democratic Party’s platform and agenda. I think my previous experiences prepared me well for the role. I was able to bring real political leadership to the position because of my experience working at the White House for President Clinton, my role as Deputy Chief of Staff at the US Department of Agriculture, and my position as the Domestic Policy Advisor for President Clinton at the Clinton Foundation. I was also able to understand the different constituents the party is serving, from rural, suburban, and urban parts of the country.

Robert: What do you want to accomplish in Congress?

I want to help improve the lives of people living in this district. This community needs representation in Congress that not only represents their best interests, but also fights for the right policies and federal support to help the district. For too long, this district has lagged when it comes to progress, and in many cases, has fallen behind other parts of the country. Rent has gone up 90% in Harlem and 55% in the Bronx over the past decade, which is unacceptable. Despite having some of the best hospitals and medical facilities in the country in this district, the average lifespan of a child born in this district is 9 years less than a child born just a few blocks south in Midtown Manhattan. 160,000 people in this district are food insecure – they don’t have access to affordable, healthy foods. Just 57% of Black and Brown boys in this city graduate high school within four years. And a third of this district lives in poverty.

So, there is clearly a lot of work that needs to be done to improve the lives and wellbeing of people in this district. The sad part is that our elected officials have had the opportunity to address many of these problems for decades but have chosen not to do so. The federal government offers some of the tools and funding opportunities needed to begin improving the lives of residents here in the district, and I can use my knowledge of the federal government along with my relationships in DC, to make sure that this district receives it fair share of federal support. I’ve been endorsed by people who know Washington and understand what it takes to be successful in Washington, including former Senate Majority Leader Tom Daschle, former White House Chief of Staff Pete Rouse, and former New Mexico Governor and Congressman Bill Richardson, among others. I want to use my knowledge and know-how to help the people of this district.

Robert: Who has your support for the 2016 presidential election?

Clyde: For me, loyalty is very important. I would not be where I am if it were not for the Clintons. They have done a lot for this country and for this community here in Harlem as well. When my mother passed away, one of the first phone calls I received was from Hillary Clinton. So I know the Clintons, I understand their passion for this country, and know that their ideas and know-how are what we need to continue the legacy that President Obama has created. I support Hillary Clinton in this race and truly believe that she is one of the most qualified people to ever run for the office – she has been a Senator, Secretary of State, and First Lady, and she has the right ideas and the know-how to get things done in Washington, which is important.

Stay tuned to The Buzz.