Students, alumni and supporters of historically black colleges and universities (HBCUs) in North Carolina and black colleges across the country will start a student-led rally today, Wednesday to fight against Senate Bill 873, which many believe will do more harm than good to the three NC HBCUs included in the bill.

The state of NC has five public and five private HBCUs—that’s more than any other state. Using the hashtag #SB873, several people took to Twitter to share their thoughts on the bill, “I want to emphasize that this an attack on HBCUs but specifically an attack on black power,” one Twitter user tweeted.

More on the Buzz: New Bill Could Do More Harm Than Good To Three NC Historically Black Colleges

Another Twitter user says, “As an Adjunct Professor at my beloved Alma mater (Winston-Salem State University) #SB873 hurts me but as HBCU alums & students if this gets passed what’s your solution?” 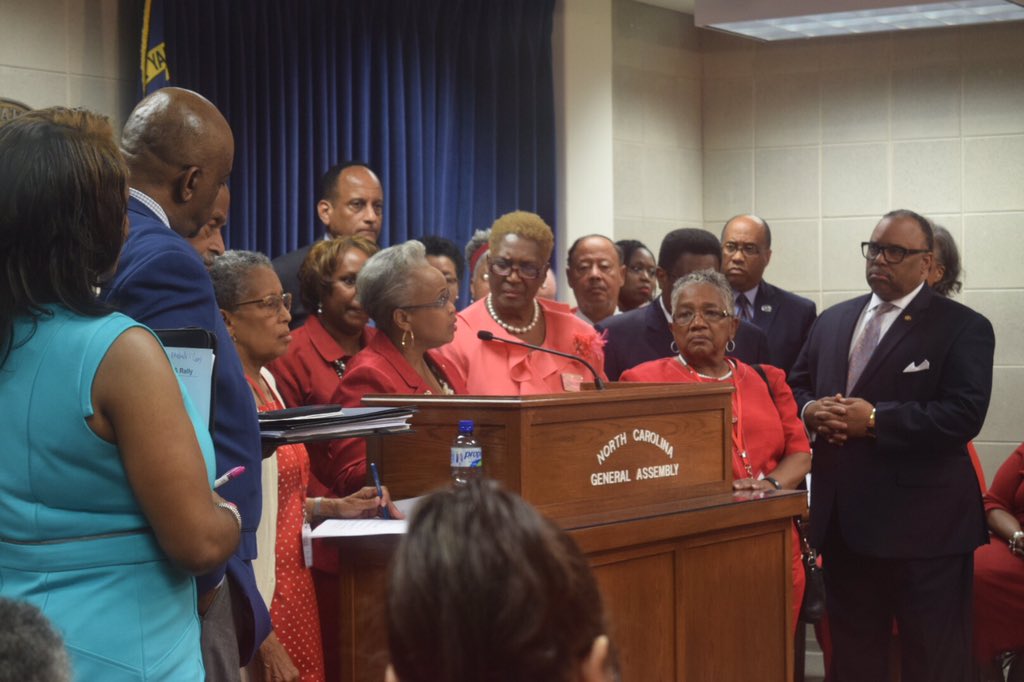 One solution is to stand up and fight back.

According to Winston-Salem State University Chancellor Elwood Robinson, the bill intends “to increase the accessibility of higher education for North Carolinians, by, among other things, reducing the cost of tuition to $500 per semester at five North Carolina universities.”

The leader of the black college also stated he believes the government should help these institutions to ensure that they remain in operation and to support the universities’ mission to continue to provide an exceptional and high-quality education to the students they serve:

“Since the bill was introduced, we have many conversations with both legislators and UNC General Administration about what it means for our campus. These discussions have been highly encouraged. As a result of these dialogues, a provision to change the name of (WSSU) was removed. Additionally, a proposed cut to student fees was reduced. We are continuing to engage in conversations as the bill goes forward. We believe it is essential for the state to provide the affected universities with funding to offset the lost revenue from tuition – as well as funding to support the anticipated enrollment growth – to ensure that instruction and student services are not diminished.”

“WSSU has a long history of educating exceptionally promising students from under-resourced families. In fact, providing a quality academic experience to those who may have otherwise been denied that opportunity is central to our mission. We believe cost should not be a barrier for any individual who wishes to pursue a college education.”

“There is no doubt that Senate Bill 873 will have a tremendous impact on our campus. In many ways, this bill is exciting because it opens the door to a college education for many deserving students. As Chancellor, my goal is to ensure we have the resources that allow us t continue to offer these students a high-quality education provided by student0-centered faculty in a caring and supporting atmosphere.”

In response to Senate Bill 873, supporters against the bill with host a student-led rally at 1:30-3:30 p.m. at the NC Legislative office building.

Host and Managing Editor of News One Now, Roland Martin, is scheduled to be a guest speaker at the event.

Update 6:05 p.m. 6/7/16: Facing backlash from HBCU students and alumni, the sponsor of Senate Bill 873 says he will remove three NC HBCUs from the budget provision, reported WRAL.com. On Wednesday, Sen. Tom Apodaca said in a statement that “he plans to offer an amendment to remove Elizabeth City State, Winston-Salem State and Fayetteville State from the budget provision. The other two schools would remain.”

Earlier, according to TV journalist Tim Pulliam, Sen. Tom Apodaca said he was “considering removing HBCUs from low tuition bill amid controversy.” Sen. Apodaca introduced the bill to the North Carolina legislature on Tuesday, May 17.

More HBCUs Using Coaching As A Way To Boost Retention

True Life: Why I Wrote Two Books While Attending An Historically Black College

An HBCU Artifact Was Randomly Discovered In A Florida Thrift Store

Flags From 14 HBCUs Will Be Included In Upcoming NASA Space...

4 Maryland HBCUs To Split $4M After Special Donation From Baltimore...