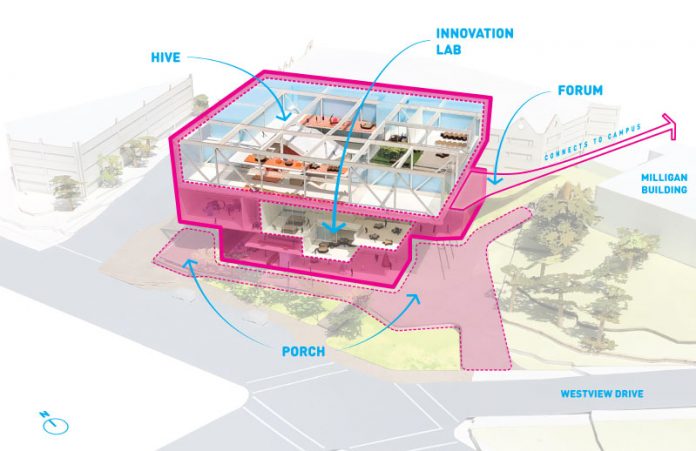 ATLANTA (December 13, 2018) — Spelman College has received the largest gift from living donors in its 137-year history from long-standing Spelman trustee Ronda Stryker and spouse William Johnston. The transformative $30 million gift will help build the Center for Innovation & the Arts, the College’s first new academic facility since 1996.

Chicago architect, Jeanne Gang, founding principal of the firm Studio Gang, has completed a schematic design of the 85,000 square footbuilding that will occupy a current parking lot at Spelman at the corner of Westview Drive and Lee Street.

“As former educators who believe strongly in social justice, Bill and I have great appreciation for how Spelman provides a superior education for students that encourages them to be global change agents,” said Stryker, a director of the medical equipment company Stryker Corp., as well as vice chair and director of Greenleaf Trust, an investment bank chaired by Johnston.

“Spelman alumnae are leaders across every field imaginable, breaking new ground, while tackling some of the world’s most challenging issues from health disparities to the digital divide. We are thrilled to support a building that will encourage students to master technology, innovation and the arts.”

Stryker has been a trustee of Spelman since 1997 and currently serves as the vice chair of the Spelman College Board of Trustees and chair of the Board’s Arts, Innovation & Technology Committee.

Consistent and extraordinary giving from the Stryker family has had a significant impact on Spelman. Their gift to establish the Gordon-Zeto Center for Global Education, for example, funded the expansion and ongoing operation of the College’s study abroad program. As a result, the Institute of International Education’s Open Doors report notes that Spelman sends more Black students to study abroad than any other baccalaureate college in the country with 75 percent of its 2018 graduating class having studied abroad.

Support from the Stryker family has benefitted numerous other Spelman initiatives, including the Spelman College Museum of Fine Arts, science initiatives, summer internships, the Annual Fund, the President’s Safety Net Fund, and renovations to Sisters Chapel and the Wellness Center at Read Hall.

“Ronda Stryker has been staunchly committed to the mission and ideals of Spelman College for more than 20 years. She has been an unstinting advocate for our students and has supported a wide range of strategic initiatives, critical to Spelman’s long term sustainability and the success of our students,” said Mary Schmidt Campbell, Ph.D., president of Spelman.

“With this historic gift, yet again, Ronda’s support will be transformational. Her contribution ensures that Spelman students will be prepared to tackle the challenges of our changing world through innovation, creativity and the dynamic intersection of science, technology, engineering, arts and math (also known as STEAM).”

Including the generous gift from Stryker and Johnston, the College has raised more than one-third of the total cost of the CI&A, which received its first support from Leonard and Louise Riggio in 2016. The cost of the new facility, which includes an operating endowment and state of the art technology, is $86 million.

The Center for Innovation & the Arts
The CI&A enables the College to bring together in one building its considerable strength in STEM with its award-winning programs in the arts. The hub of the building will be the Innovation Lab, co-directed by Brown-Simmons Professor of Computer Science Jerry Volcy, Ph.D., and Associate Professor De Angela Duff, MFA, whose work sits at the intersection of art, design, and technology, in consultation with Senior Adviser Topper Carew, Ph.D., a visiting scholar at the Massachusetts Institute of Technology Media Lab.

A major feature of the building will be its “Front Porch,” an element of the design that opens up the entrance of the CI&A to the Westside community and offers a set of ground floor amenities. They include an expansion of the award-winning Spelman College Museum of Fine Art, a digital theater housing publicly accessible performances, technology events, film screenings and a cafe.

A schematic of the CI&A demonstrates the innovation and intentionality behind creating a unique interdisciplinary environment. The facility will offer different scales of gathering and assorted modes of connecting and collaborating for learning and risk taking in the liberal arts.

ARTS@Spelman New Programming
Under the leadership of award-winning, innovative independent filmmaker, Ayoka Chenzira, Ph.D., division chair for the Arts, Arts@Spelman has developed a new initiative and several new majors and minors that join Music and Theater & Performance including:

Spelman innovation and arts leaders shared their thoughts on this significant gift:

Ayoka Chenzira, Ph.D., Division Chair for the Arts, Spelman College
“This generous gift by Ronda Stryker and William Johnston represents a deep understanding of the value of Black women’s research as it relates to artistic creative expression and the use and integration of technology to help discover and articulate new forms of imaginative processes that engage with global conversations. Spelman students will be at the forefront of these new discoveries as a result of this gift.”

Topper Carew, Ph.D., Senior Adviser, Atlanta University Center Collective for the Study of Art History and Curatorial Studies
“The Stryker gift will further support the unprecedented ascendancy of the great Spelman women and their continuing stellar contribution to American society.”

De Angela Duff, MFA, Associate Professor, Co-Director of the Spelman College Innovation Lab
“Ronda Stryker’s gift empowers Spelman College to educate 21st century, women-of-color visionaries who will create a cultural paradigm shift by embracing creativity at the intersection of the arts and technology and harnessing the power of innovation.”