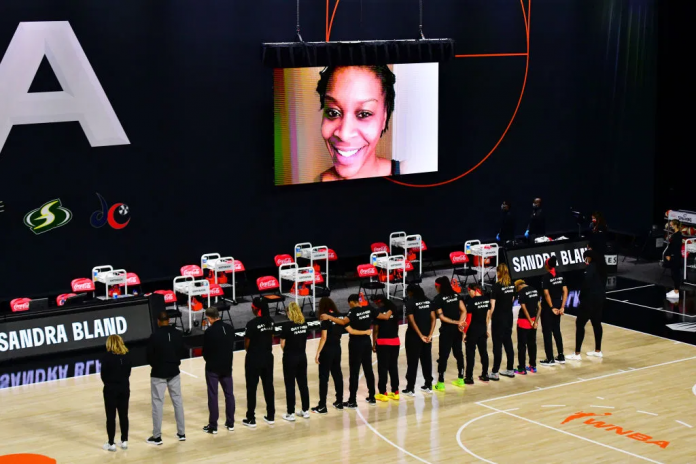 It’s been 6 years since Sandra Bland‘s death, and in that time her story has unfolded, with many questions still unanswered. However, in that same span of time, the Prairie View A&M University alumna has left a lasting legacy in the U.S. and beyond. Read the beautiful story about Sandra Bland’s reach in the NewsOne article about Bruce C.T. Wright below.

The 28-year-old was driving from her native Illinois to begin a new job at Prairie View A&M University when she was pulled over for a minor moving violation. But what should have been a routine ticketing experience quickly devolved into brutality when State Trooper Brian Encinia failed to de-escalate the encounter, which resulted in Bland being charged with assault.

Dashcam video from Encinia’s cruiser suggested he was the aggressor.

Three days later, on July 13, 2015, Bland’s body was found hanging from her jail cell, where she had been remanded because of an inability to afford a $5,000 bond.

Even though Bland’s death was ruled a suicide, suspicion of officers in the Waller County Jail has lingered as no one has ever been held accountable.

Bland’s death took place amid a spate of controversial police-involved deaths of unarmed Black people, thrusting her name onto a growing list on which no one wants to be.

The law was recently involved when an inmate was found unresponsive and pronounced dead in his cell at Bexar County Jail on Saturday. In that instance, the local sheriff’s office, as well as the Texas Commission on Jail Standards, were notified of the in-custody death of Michael Rene Johnson — two groups that, prior to the Sandra Bland Act being enacted, may not have been told promptly, or at all, about the incident.

Bland’s name also lives on with the launch of the brand new Sandra Bland Center for Racial Justice in Austin. When it opened back in May, Bland’s mother explained what the organization wants to accomplish, local news outlet KSAT reported.

And in an indication of how important and widespread Bland’s name and legacy has become for the Black Lives Matter movement, a new “Say Their Names” Memorial was opened last week in San Diego and prominently includes Bland.

Not all has been positive since Bland’s death. The justice being demanded by her family since Day 1 has been elusive. Her family noted last year amid the national protests against police violence and demanding racial justice and equality that law enforcement was still killing Black people with impunity.