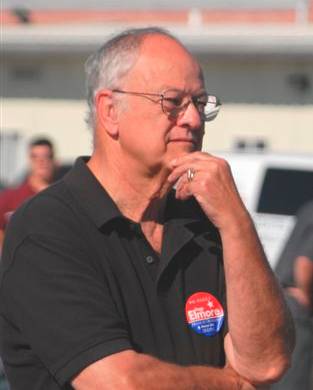 The family of Page Elmore is establishing a scholarship in his name at the University of Maryland Eastern Shore. Friends and admirers of the respected business leader and public servant are invited to contribute to the fund.

Elmore, a two-term state lawmaker who died a year ago June 26, was instrumental in helping UMES launch a graduate program in pharmacy.

Elmore’s wife, Carolyn, and nephew, Fred Lankford, decided financial aid is a good way to honor his memory and acknowledge his role as a champion for expanding degree options at UMES, which he represented for eight years in the Maryland legislature.

The D. Page Elmore Endowment will provide an annual scholarship to an Eastern Shore resident with strong academic and community service credentials who enrolls in UMES School of Pharmacy. As the fund grows, multiple scholarships could be awarded, a UMES official said.

“It was his hope that having a scholarship like this would keep many of our talented young people at home by providing opportunities here,” Carolyn Elmore said.

UMES’ pharmacy school opened in August 2010. The university received some 900 applications for the first class and selected 64 students, one third of whom are from Delmarva.

When those students graduate in two years, they will receive doctor of pharmacy degrees and should have multiple offers for well-paying jobs in a growing field where opportunities should be plentiful for years to come.

“Page thought education was the key to success,” his wife said. “It was important in his life. He always tried to reach out to students and help them have a good experience.”

Mrs. Elmore said her husband took pride in working on UMES behalf because of his admiration for what Dr. Thelma B. Thompson has accomplished during her nine years as president. For Thompson, who retires Aug. 15, the feeling was mutual.

“Del. Elmore was a practical optimist.  He believed in the possible,” Thompson said. “When he became convinced that the Eastern Shore deserved engineering and pharmacy programs, when he was convinced that UMES could deliver those programs to the citizens of the Shore, he fought hard for us.”

Elmore’s former constituents see the decision to create a scholarship in his honor as a fitting tribute to his legislative legacy.

“He loved UMES. He did a lot of things for it,” waterman Danny Webster said. “He was a good advocate for what he believed in and I know he believed in UMES.”

Charles Massey, a retired Somerset County administrator, said “he would like it. He might not say so. He would be quiet about it. But I know he would be honored.”

Bunky Price, a Democrat who called the late Republican a friend, said Elmore worked hard for UMES because “he knew what it meant to this community. He was very proud that he was able to get through (to decision-makers) and have that pharmacy program.”

Lankford, a member of UMES Board of Visitors, considered his late uncle “a mentor, a very astute business person and a very effective legislator for District 38-A especially for the agriculture and seafood industries.”

“Without the leadership of D. Page Elmore and President Thelma Thompson, there would not be a UMES School of Pharmacy,” Lankford said. “Page Elmore Endowment Fund contributions will provide needed scholarships and career paths in a high-demand industry.”

Melody Nelson, another constituent who admired Elmore, said “Page would be quite honored knowing his family is continuing his efforts promoting the pharmaceutical program  development at UMES and supporting the students through a scholarship program.”

The D. Page Elmore Endowment Fund will be held and managed by the UMES Foundation.

To support the Elmore Endowment scholarship fund, contact: Gains Hawkins, vice president for institutional advancement at UMES, at 410-651-7773 or at ghawkins@umes.edu