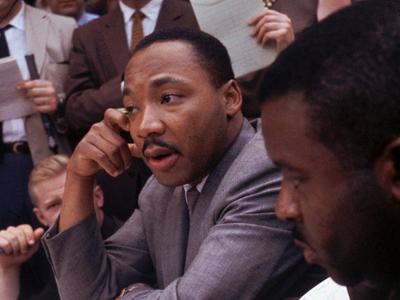 “With this faith, we will be able to hew out of the mountain of despair, a stone of hope.”– Rev. Dr. Martin Luther King, Jr.

A mountain is a colossal formation of rock that was created years before man’s memory, a testament to the Great Architect’s everlasting mastery. It is permanent, it is incredibly hard to overcome, and it is impervious to change.

It is also a reminder of man’s futility in searching for immortality. A mountain is interminable, but man can meet his end on any given day. Some of us cannot live forever. We can try to live on through leaving a legacy, what we were able to create while on Earth.  Common’s Finding Forever album sets its theme on the premise that through music, he, along with the most legendary of musicians (Jimi Hendrix, Michael Jackson, Tupac Shakur) can live forever, long after they have retired and have gone on to make music with angels.

Sports heroes can reach the same plateau, but only by transcending their sport. Michael Jordan’s name is synonymous with basketball, and he became the sport’s first global icon and brand, thus he has a statue outside of the United Center in Chicago where he made basketball his kingdom. Bill Russell, the NBA’s  most championed player with 11 titles under his belt, will have a statue of him in Boston’s City Hall Plaza, an overdue tribute to Boston’s biggest winner–in championships and in race relations.

Martin Luther King Jr. spoke of mountains in his famous “I Have a Dream” speech, the quote italicized above and the one that will appear on the side of the 30-foot mountain of a memorial in which MLK’s likeness emerges, standing tall and firm. In his most famous speech, he referred to escaping out of “a mountain of despair.” That perfectly symbolizes how African-Americans felt about America and its system of segregated racism and discrimination. It is permanent. It is incredibly hard to overcome. It is impervious to change.

The committee who created the monument did their best to make King’s words as literal as possible. When we go to Washington, D.C. to see the memorial, we will travel through what the designers have proclaimed the “mountain of despair”-a boulder shaped portal through which tourists and visitors will walk through. This symbolizes the struggle King went through in order to obtain justice and equality.

This leads to The Stone of Hope King mentioned in his speech. Why a stone? I believe that when an entity such as a mountain changes and becomes something new, it has to be given a new name. It is not the same as it once was, even though it looks the same. King didn’t change the name of the United States, but he did change it–forever, and for the better. King changed America, the mountain of racism and oppression that he was destined to climb and conquer.

His last speech, given the day before his assassination, was entitled “I’ve Been To The Mountaintop.” He talked about the crazy black woman who tried to take his life by stabbing him in the chest with a letter opener. The blow was so severe that if he sneezed, he would die. He went on live a life of service, helping to climb the mountain of racism and segregation in America. The next thing he did was bigger for the cause than the last one. He had to start at the bottom, because that’s how you climb mountains. He helped the Civil Rights Movement make stride and stride, overcoming challenge after challenge.  He was there when President Lyndon Johnson signed the Civil Rights Act of 1964. He was the youngest recipient of the Nobel Peace Prize. Those accomplishments are nothing to sneeze at.

He knew on April 3, 1968 that he did not have long to live. He said he would not be with us to reach the mountaintop, but that as a people, we would reach the Promised Land. A land where mountains, like King, are interminable.