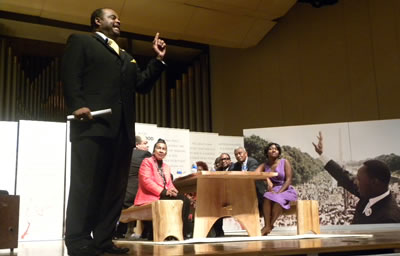 The Rev. Otis Moss Jr. ’56 took the Table of Brotherhood Project audience on a quick oral tour of the Auburn Avenue that Martin Luther King Jr. ’48 would have walked down as a youngster.

Strolling by churches, successful black businesses and positive black images, a young King saw that despite the racism of the times, he and other black people were destined for much more,

“He realized there was nothing wrong with him. There was something wrong with THEM,” Moss said to shouts from the audience of approximately 1,500 in the Martin Luther King Jr. International Chapel. “We’ve got to recreate that type of nurturing community. It seems to be an impossible task, but we’ve got to try anyway.”

Uplifting black communities was just one of the topics broached by Moss and a panel of experts from media, civil rights, entertainment, politics and business.

Sponsored by Chevrolet and the General Motors Foundation, the Table of Brotherhood Project is a four-city discussion tour of cities and places that were vital to King’s life, said GM Foundation President Vivian Pickard. Moderated by CNN’s Roland Martin and author Lisa Nichols, the talks delve into politics, health care, education and other pressing issues important to King and to today’s black community.

The tour goes to Memphis, Chicago and Washington, D.C., as a lead-in to the unveiling of the Martin Luther King Jr. Memorial on Aug. 28.

“We all know the importance of Morehouse to Dr. King,” Pickard said. “That’s why we’re here. We wanted to be in a venue that was significant and important to Dr. King. What better place could we be than Morehouse? The history here is phenomenal.”