Southern University’s Aeneas Williams has been named a finalist for the Pro Football Hall of Fame Class of 2012. 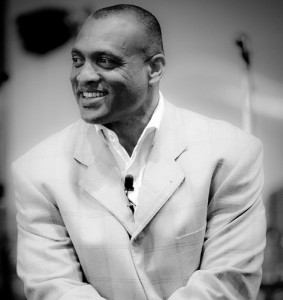 On most Sundays, you can find former Southern defensive back Aeneas Williams standing behind the podium of The Spirit Church in St. Louis, where he has been its pastor since its inception. If the votes go his way on Saturday, Williams will find himself standing behind another podium in August. In Canton, Ohio.

Williams is one of 12 finalists for the Pro Football Hall of Fame’s Class of 2012. It is significant on a couple of fronts. He is a testament to hard work and a rock-solid faith, both of which he credits for having a 14-year career with the Arizona Cardinals and St. Louis Rams.

And if Williams makes the Hall he will represent an ever dwindling pool of players from the Southwestern Athletic Conference who have gone to the NFL and had standout careers. For the foreseeable future, it is Williams and former New York Giants defensive end Michael Strahan — a Texas Southern alumnus — who should be a first-ballot hall of famer.

Admittedly, when Williams was in Baton Rouge, times were different. Many of the players on SWAC rosters were second generation — their parents went to the schools and they were extending legacies. Today, legacies aren’t as much a consideration. Kids have more options, Williams said. Schools that were once considered second-tier, like a Boise State or a TCU, have been made attractive thanks to cable television deals.

Williams, who walked on at Southern during his junior year, had to work hard to be noticed. And what baffles him most is he didn’t consider himself among the best players at Southern. What made the difference for Williams was his preparation. During the offseason, he would work out at Tulane with NFL players in his hometown of New Orleans. He went up against former high school classmates Maurice Hurst, who was with New England, and Kevin Lewis, who played for San Francisco.

“All of us went to the same high school, but I couldn’t touch those guys athletically,” Williams said. “But I got around them enough, and did what they told me to do. I did what they did, and competed against those who were beating me very badly in one-on-one drills. But I stayed with it.

“Then I look up, and Archie [Manning, former Saints quarterback] sends [his son] Peyton out there. Peyton comes out there and he’s working out with us. He’s a tall, skinny kid who looked like he could barely walk and chew gum. But he’s out there in that environment. So all of a sudden I found out the law of environment. If you put someone in an environment long enough, [they] will adapt and come up to the environment, if it has the capability of being inside them.”

There was a lot inside Williams, but he just hadn’t figured it all out. He had a scholarship offer from Dartmouth, but like his father, and his brother Achilles, Williams wanted to go to Southern. Then his goal in life was emulating his brother. Because his brother was an accounting major, Williams became one, too. When his brother got involved with student government, so did Williams. Sports were barely an afterthought for Williams. His brother graduated in three and a half years; Williams was on pace to graduate school in three years.

That was before the phone call.

“He called back and said, ‘Little brother, slow down. You’re going to be working the rest of your life.’ After he graduated, and I had been known as Achilles’ little brother, I didn’t know who I was.

“I believe that’s when God started dealing with my heart to figure out who is Aeneas. A short time after, I received Jesus Christ as my Lord and savior. I began understanding that each person’s life has a purpose, and that each of us have a unique bent.”

For two years, former high school teammate Michael Lindsey wanted Williams to join him at Southern and walk on to the team. But Williams refused. Then while at home in New Orleans prior to his junior year, an uncle asked Williams the same thing. But everything sounded different now.

“Those were the voices God was using in my life,” Williams said. “I didn’t know it at the time. They were to get me to start thinking about what I like. And I remember telling Michael Lindsey, at that time, I will walk on the team.

“I guess he thought I was crazy because he gave me the worst equipment, and these guys had already been through three-a-days. He let me out there and I hustled my butt off — hustling and hitting people like I was crazy. My whole goal — I didn’t dress out that first game — was make the traveling squad to Texas Southern the next week. I never told my friends or my brother that I’d walked on. I didn’t tell my parents.

That’s because Williams was afraid they’d discourage him for attempting something that seemed so crazy at the time. It wasn’t until Williams saw his name on the traveling squad list midweek of the TSU game that anyone knew he was even on the team. His buddies learned he was on the team in the middle of discussing a road trip to Houston.

“I told them I was going to the game, but I won’t be going with you guys,” Williams said. “They didn’t know what I was talking about. Then I called my parents and they didn’t miss a game.”

Williams would go on to be a third round selection of the Arizona Cardinals in 1991. Seeking to become the best, he again surrounded himself with the best. He sought out and received guidance from Michael Haynes, Ronnie Lott, Kenny Houston and Gil Byrd.

“I’d write goals and then through those goals, I’d give them to the Lord and pray about them,” Williams said. “I started becoming what I’d written. And then when I’d gotten to the league, I started from Day One.”

He was NFC Defensive Rookie of the Year. He went on to star at cornerback for 12 seasons before switching to safety. He was named to the Pro Bowl eight times and played in a Super Bowl while with the Rams. Williams also was first-team All-NFC in 1995, 1996, 1997, and 2001.

Another thing that generally does not show up on a stat sheet but is part of football lore is the fact that Williams ended Steve Young’s career. Lawrence Phillips failed to pick up a blitzing Williams, who leveled Young. The clean but brutal hit was Young’s last.

Williams’ preference also was making an impact on people’s lives in a more positive way. Throughout his career he and his wife Tracy have been active in their church and training for ministry during the offseason.

“The guy that discipled me in New Orleans and helped me understand what the Christian faith was all about told me that when you go to play for the Cardinals, don’t go up there like some rookie who doesn’t know anything,” Williams said.” He said to go there with the heart’s desire to use my life and have an impact to help other guy’s lives. To use the principles of God’s word to be successful at your craft and be successful off the field.

“When I got in the locker room, I saw a lot of guys at the pinnacle of where they wanted to be — in the NFL — but not able to balance their family lives. The marriages were suffering. I started a Bible study for men on Monday, and my wife and I did a couples’ study on Tuesday. And my wife did a spouse and significant other study on Saturdays. One of my goals is to have one of the best, most impactful ministries in the world. I wrote all this down years ago. We were doing what we are doing now, but now we’re doing it fulltime.”

Now the waiting game begins. Perhaps the anxiety will be more stressful for those around him, but not for Williams. He is flattered but knows whatever happens is out of his hands.

“I’m not on pins and needles,” Williams said. “It’s another step in life that is truly humbling. When you get people in that room who are the voters, who remember how you played the game. They not only remember it, they are willing to stand on a table and bring up the statistical data and factual input that would cause people to even consider putting me among football immortals. That is truly humbling.

“It’s an honor and I am just excited about the opportunity. It would be a representation of my parents, of the God that I serve, my wife, children, every coach, and every teammate who I sweated with and challenged me. All those guys stand at the podium potentially with me.”

FAMU Set To Join The SWAC