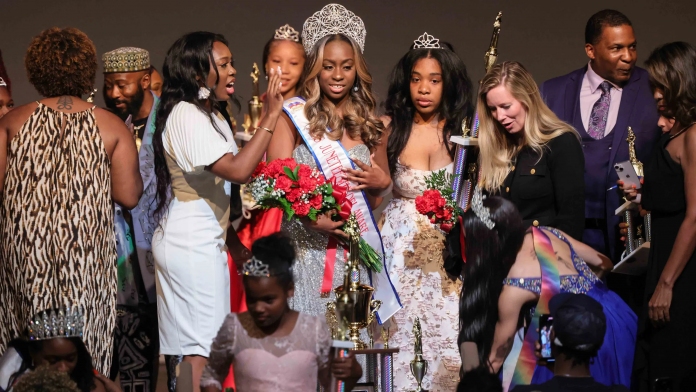 A Delaware State University alumna is among the Miss Juneteenth Delaware winners that are sharing how much the crown has meant for the community for over 20 years. Learn more in the story by Anitra Johnson at the Delaware News Journal.

For over 20 years, the Delaware Juneteenth Association has been running the Miss Juneteenth Pageant in Delaware.

From the first Miss Juneteenth’s crowning in 1998 to Sunday night’s announcement of Miss Juneteenth Delaware 2022, those same lessons about self-esteem and connection are still being taught.

Conceived by Bernie Wilkins, the local group organized the group’s pageant as a way to teach Black girls about African American history, to instill pride in who they are, and as a way to feel embraced by their family and their community.

The aims of their efforts appear to have been realized for many participants, past and present.

“I don’t think I would be the person I am without the Juneteenth pageant,” said Naeemah Murray, Miss Juneteenth 2012.

Ten years ago, Murray said she was 14 years old and did not know how to fully express herself. While working with the adults in the program, Murray said she received encouragement that helped her discover her love for dance and enabled her to tap into creativity she never knew she had.

She also said she feels that the program helped her develop a sense of self that she didn’t get through former education.

Murray, a graduate of Delaware State University, a historically Black university, said she took an African American history class in college, but it wasn’t explained the way her Delaware Juneteenth Association instructor presented it.

“It’s not like textbooks or anything like that,” Murray said, adding that the workshops helped her learn about her history on a “different level.”

Coming home with the crown

This year, 11 contestants, also known as Queens, competed in three categories: Juniors, ages 8 to 11; Showcase, ages 12 to 14; and Seniors, ages 15 to 18 who vie for the title of Miss Juneteenth.

On Sunday, Trinity Evans of Wilmington was crowned Miss Juneteenth Delaware 2022. On a platform advocating art for children who are suffering from depression and drug abuse, the 16-year-old will travel to Galveston, Texas, in October to compete for the national title.

Juneteenth started in Galveston, Texas when slaves there learned on June 19, 1865, that they were free from bondage under Lincoln’s Emancipation Proclamation.

Sandy Clark, the Delaware Juneteenth Pageant director, has been managing the pageant since its inception – even before there was a national Juneteenth pageant that began three years ago.

She said that the contest was once statewide but has since whittled down to just the New Castle County area. She and the other organizers hope that this event also grows along with the knowledge of the history of Black Americans.

Sydney Brown, a senior competitor from Wilmington, said she decided to participate in the pageant to challenge herself. In doing so, she said that she found that she really enjoyed the experience because it allowed her to develop herself and have fun with her friends.

“The thing that I like most about this whole process is that I can express myself through my topic and I love to dance,” Brown said. “I also love the contestants here.”

The Christiana High School student said chose her platform of mental illness awareness in the Black and African-American community while sitting at the dinner table with her mother. Brown said that in choosing her platform, she considered what issues were affecting people negatively and how could she address them in her community.

For boys and men, too

Brenda Timmon-Gunter, the pageant emcee and organizer of the Juneteenth Festival, said that a driving motivation and bigger intention of their efforts is to get the families involved in activities that they can do together. That means men and boys, too.

They have found that rather than a pageant, they need a different approach when it comes to holding the interest of boys.

“We found that the boys don’t like to go through [ceremonial] processes,” said Sandy Clark, the Delaware Juneteenth Pageant Director. “They just want to go and show their talent and just, you know, get the [scholarship] money and leave.”

So next up is the Juneteenth Male Talent Showcase, slated for Wednesday at Christina Cultural Arts Center.

To expand its outreach, Delaware Juneteenth Association is partnering with New Castle County to develop a fraternity program for boys. They are approaching organizations and individual men to help lead the boys.

“We’re definitely recruiting males,” Timmon-Gunter said. She explained that while it is important to have women and mothers involved in children’s lives, “we need the brothers to start stepping up because boys need to have some role models.”