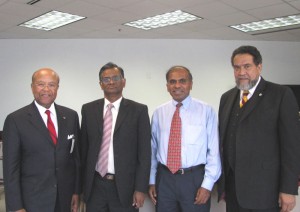 ARLINGTON, Va. (July 26, 2011) — A Tuskegee University delegation, including President Gilbert L. Rochon; Tuskegee University Board of Trustees Chair Charles E. Williams; and Shaik Jeelani, vice president for research and sponsored programs on July 19 visited the National Science Foundation. They met with the director of the foundation, Subra Suresh, and managers of the various programs funded by the NSF at the university. The group discussed the university’s vision to enhance research and education at the institution. According to Jeelani, Tuskegee currently has active NSF grants worth $12 million.

The National Science Foundation (NSF) is an independent federal agency created by Congress in 1950 “to promote the progress of science; to advance the national health, prosperity, and welfare; to secure the national defense…” With an annual budget of about $6.9 billion (FY 2010), it is the funding source for approximately 20 percent of all federally supported basic research conducted by America’s colleges and universities. In many fields such as mathematics, computer science and the social sciences, NSF is the major source of federal backing.