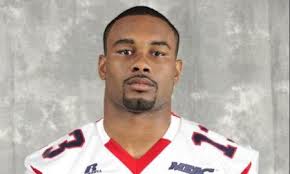 Keith Pough, linebacker for Howard University, was awarded the Pat Tillman Award at the East-West Shrine Game® banquet Friday evening. The award is presented annually to the player who demonstrates courage, perseverance and talent throughout the week leading up to the game and recognizes his overall achievements and conduct.

“Keith exemplifies the qualities we look for in the award winner,” said East-West Shrine Game executive director, Harold Richardson. “From the hospital visit through practice, he has conducted himself in a way we believe Pat Tillman would be proud.”

“He first caught our attention at the visit to Shriners Hospitals for Children – Tampa last Sunday. You could see that he had a great time coloring, dancing and playing with the kids,” said West team manager, Andy Strickland.

“From day one at practice, he’s been a very vocal leader, encouraging and supporting his teammates on both defense and offense,” said West team head coach, Leeman Bennett. “He gives tremendous effort on every play and has shown great toughness. He’s the kind of player coaches like to have on the field.”

Pough, a 6’3”, 235-pound linebacker, finished his career at Howard as the all-time career leader in tackles for losses for in the FCS. For his efforts, he earned MEAC Defensive Player of the Year. Pough is the first player in Howard history to be selected to participate in the East-West Shrine Game, the oldest college football all-star game.