(BOWIE, Md.) – Three Bowie State University students and their professor will travel to Nigeria this summer to study the DNA sequences in native varieties of yams, a staple crop in western Africa. The students will then use their findings to analyze yam products that are imported to the United States, as they hone food forensics skills that could aid the nation in fighting future agroterrorism attacks.

Led by Professor George Ude, the team will document the genetic diversity of the tropical yam species and perhaps discover unique gene sequences, using a powerful, online supercomputing tool called theDNA Subway. The team will then share their findings with scientists all over the world through GenBank, a gene database developed by the National Institutes of Health. Using food forensics, they will test imported yam products, like flour, sold in local Maryland markets to ensure that they contain only elements of yam varieties, not other plant sources. 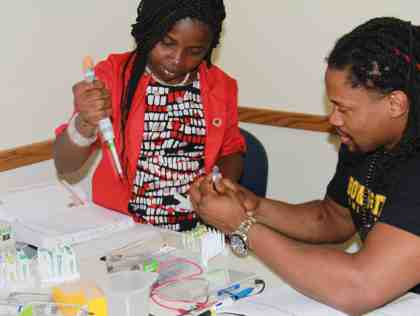 Because the U.S. Customs and Border Protection agency calls agro-terrorism a dangerous threat to the food supply, Dr. Ude is working to build Bowie State’s capability in food forensics and preparing students to help in “securing the country from potential food terrorism, especially involving exotic food types imported from other countries.”

The students – Daniel Ballah, Jonathan Harper and Julian McCormick – are seniors majoring in biology who showed strong research skills in Dr. Ude’s molecular biology course last fall. They will serve as mentors to their peers in a new genetic engineering course at Bowie State starting in fall 2015.

“Bowie State undergraduate students are working with the same tools and skills as seasoned researchers in the fields of biotechnology and bioinformatics,” Dr. Ude said. Read Full via Bowie State University