While none of us remember our first steps, Dytria Ruddy has it on good authority that hers were followed not so long thereafter by her first attempts to kick a soccer ball.

Ruddy does recall one of the first games she played, more specifically when her mom stuck up for her after another parent complained about how many goals she scored. And she remembers the tournament when she was 10 or 11 years old in which the foul she committed gave the opposing team a penalty kick that decided the game. The mistake itself isn’t a pleasant memory, but the run that her team made to reach the game lingers fondly.

Soccer has been a part of her life and has helped shape her life since she was 4 years old. But when Howard University next loses a game, either in this week’s Southwestern Athletic Conference tournament in Alabama or the NCAA tournament beyond, Ruddy’s competitive career will in all likelihood end with the final whistle. That doesn’t mean she will leave the game — or it her.

“It’s a universal sport; it’s loved everywhere,” Ruddy said. “Everywhere I go there is going to be someone I connect with because I love soccer.” 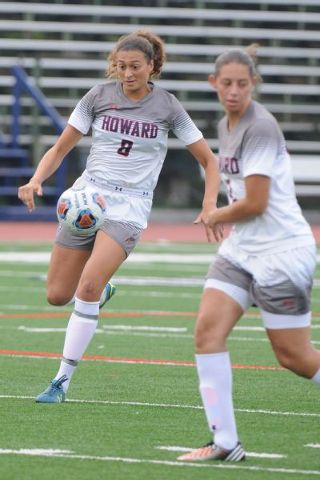 What might be its most appealing attribute is that it can be common ground.

The objective at Howard is to show that soccer’s universality can not only survive but thrive at the Division I level alongside, and as part of, the HBCU (historically black colleges and universities) experience. Though they might be cast differently, Ruddy and fellow captain Sara Vaughan, Canadians whose mothers are from Chile and Guyana, respectively, are part of that.

Soccer may be universal, but it is an ongoing challenge to ensure its opportunity is such for girls. Doing so takes many forms, from expanding opportunities within the national obsession in places like England to establishing basic rights to play in parts of the Middle East. It continues in this country, too, because even amidst arguably the strongest women’s soccer culture in the world, the sport still isn’t a reflection of the true diversity of the American experience. Shannon Boxx, Sydney Leroux and Christen Press were the only players with African-American heritage on the U.S. World Cup winning roster, just one more than the 1999 roster, while teams like France are much more diverse.

Although representing roughly 13 percent of the U.S. population, blacks accounted for just 6.4 percent of Division I women’s soccer players during the 2014-15 academic year, according to NCAA demographic data. While significantly higher than field hockey (1.4) or lacrosse (2.5), that participation rate trailed basketball (51.0), volleyball (13.9) and softball (7.5) among team sports.

Exclude Division I HBCUs and soccer participation falls to 3.7 percent. Even counting those who identify as of two or more races, i.e. multiracial, brings the rate without HBCUs to only to 6.9 percent. College athletics has its issues, but those rates are reflective of a grassroots problem. read more

HBCUs Are Reporting ‘Largest Gift In History’ From MacKenzie Scott

NewsOne: Howard Grad ‘Nick Cannon Loses His Job Faster Than Any Of The Cops Who Killed Breonna Taylor’

HBCU Student Megan Thee Stallion And Cardi B To Release A...