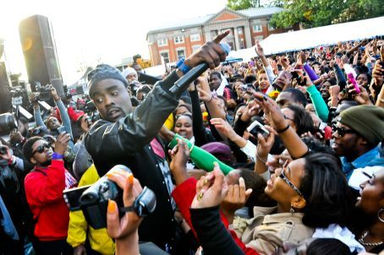 Rapper Wale is putting on for the Howard University community with the cover of his new mixtape Summer On Sunset, which a young lady is seen wearing Howard clothing.

The DC rapper, who once attended both historically black Virginia State University and Howard before taking his rapping chops seriously, has been quite busy as of late. He dropped his new single “My P.Y.T.” a few weeks ago and recently perform his song for the ladies on The Tonight Show With Jimmy Fallon, according to XXL magazine.

Wale insists “My P.Y.T.” is only for his upcoming album SHINE, and will not appear on the Summer on Sunset mixtape, though.

But we’re still going to give this a listen in 2016, anyway.

Head over to XXL to read more.

This FAMU Pharmacy Student Is Eyeing The Lash Business

Meet The HBCU Grad Who Is Making A Splash As A...

Gary Owen Announces His Daughter Is Attending An HBCU