If there’s a need for proof that one can love their POTUS for all the good he’s done, all while being skeptic and calling him out when he is flat out wrong, let me introduce you to Dr. Julianne Malveaux and her new Book “Are We Better Off?”

Dr. Malveaux, an author, journalist and President Emerita of Bennett College, comprised 80 of her journalistic columns from 2008 to 2015 that analyze and critique Obama’s presidency, and his handle on issues that effected the free world. The book touches on many topics through articles and research, displaying the highs and lows of our 44thpresident’s tenure.

“On any given day the same people are going to feel differently about their President. On any given day and then as time goes on. There’s going to be this ebb and flow, but for us as black people, no matter where you are on the political spectrum, there was some sense of pride, and I hope expectation,” Malveaux said.

Ranging in topics from economics, social justice, public policy, and other pertinent world issues that America faces today, Malveaux saw fit to create the piece to put her opinion on Obama’s time as president and to create an important conversation.

Malveaux says, “This is our first black president, this is history I don’t regret having voted for him.” Nevertheless, standing on her right to exercise and legitimately criticize Obama and what he’s done as POTUS. 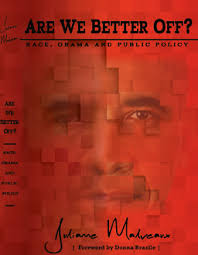 According to Malveaux, there were also issues during Obama’s presidency, specifically affecting the Black community, that he did not show up for or rather address–HBCUs, Affirmative Action, student loan debt and an array of other issues that basically went overlooked in her opinion.

As former Bennett president, active in years of 2007-2012, Malveaux worked through a time where HBCUs were essentially cut from the US budget. Nothing like a time where president Bush made it so that 85 million dollars was included in the budget specifically for historically black institutions. Malveaux says that she doesn’t believe Obama has an “HBCU Sensibility.”

“We in HBCU land have especially seen it,” she said. “When he goes to Morehouse and gives a commencement speech that is essentially demeaning, when he goes to the Congressional Black Caucus and tells people to put on their marching shoes, when he has the person who leads his HBCU initiative [Dr. John Silvanus], who says that half of our HBCUs don’t even need to be open. But in many ways black people have not seen what we thought we might see from this black president.”

Dr. Malveaux says that though there are issues that went unsolved in his presidency, there has to be some recognition of the obstacles President Obama has had to overcome.

“When you assume a critical face with this president, you also have to look at many of the challenges he had to face,” she said.

“Are We Better Off?” also takes a look at the student loan issues for college students and alum in America: “If we believe in developing intellectual capital, we ought to believe that students should have a subsidized opportunity to pursue higher education.”

Malveaux says the average student who graduates with student loan debt is having to pay close to $60,000. She believes that like highways, roads, and regulation of wall street, Higher Education works for the good of the public.

In retrospect, “Are We Better Off?” is a mouthpiece for what a lot of black Americans wish to express about president Obama, but are afraid to. Each of the issues Dr. Malveaux touches on in the book, are at the forefront at a lot of our woes and struggles in black culture.

Malveaux also notes that, if we as a people would have pushed him as hard as LGBTQ and Latino communities have done, that there would have been more changes. “President Obama ignored us, but we let him ignore us,” she said.

“The African American Community never felt emboldened to push him as far as he needed to be pushed. We always allowed grace, loyalty, and our enjoyment of style to trump our needs for substance.”

You can find out more about “Are We Better Off?” at Juliannemalveaux.com