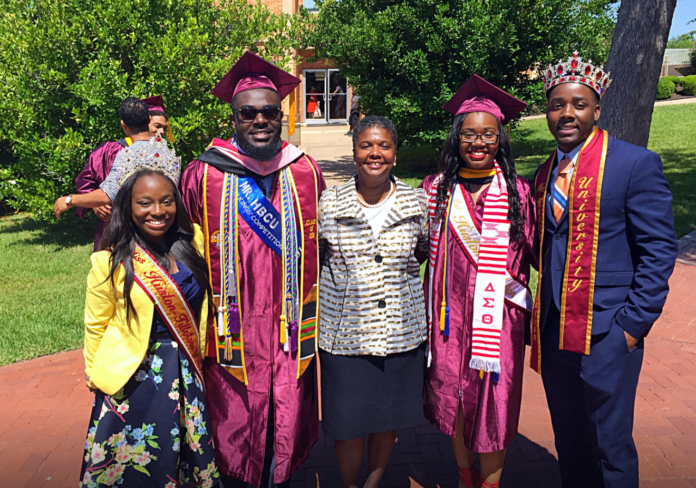 The suffering of self-doubt and depression was the undetected battle of Joseph Jamal Reese, Mister Huston-Tillotson University 2014-2016 & Mister HBCU 2016-2017. Growing up in the small country town of Somerville, Texas Reese became the youngest of six siblings.

Being a pastor’s kid makes it easily understood why Reese has a heart for singing and a deep adoration for worship and gospel music. Applying to only Huston-Tillotson, Reese realized that living in Somerville had limited options and nothing was left for him there. If he stayed he would run in a cycle of not growing but once visiting Huston-Tilloston University he knew that this place that felt like home, was the next step for life.

He was ready to grow and since completing college many have witnessed the change just like good friend Brooke Gordon. “Oftentimes, when we speak of change and the ways in which people change it has a negative connotation to it. This is however, not true about Joseph,” Brooke Gordon said.

Like many HBCU student leaders, Reese pondered heavily on running for Mister Huston-Tillotson.

“I said NO for an entire year until I decided to step out on faith and listen to those who believed in the leader I could be,” Reese said.

Within the history of the University Reese was the only king whom served two terms. A new administration was coming into fruition and wanted Reese to have his fair chance at the opportunity of running for Mister HBCU.

“He came in and stayed to himself in the beginning. Upon being crowned Mr. Huston-Tillotson University, Joseph immediately became the most admirable campus leader and did the best job any one person could ever do representing our university,” his classmate Charleston Samuel said.

Reese could have easily taken a comfortable and predictable job after graduation but decided to step out on faith and follow his dream career. Taking a plunge into the deep end, he decided to get fully engaged in the field of entertainment.

“Not moving with haste” is the mindset even though he still finds himself pondering his next moves. Making a career out of singing is no easy task and can be difficult and unpromising. With this realization Joseph began developing mentor relationships with several individuals that are experienced in entertainment.

“Joseph has become more confident in his callings. Experiences and opportunities have fine-tuned him into a very intelligent, confident, conscientious, spiritual, compassionate, leader, mentor, talented and thoughtful young man, just to name a few descriptors,” his mom Josephine Reese said.

While in college Joseph began to heal from hurt of losing a loved one.  Being the son of a mother who was a teacher for 38 years and a father who was a train engineer, he was always taught to take the most of academic opportunities while striving for great reputation.

On December 13,2011, his father’s battle against Pancreatic Cancer ended after a nearly 2-year fight. It wasn’t until 2 years later during sophomore year in college that Joseph could deal with the bottled-up grief. It was at a prayer gathering that Joseph finally let loose.

“I finally allowed myself to grieve with complete transparency,” Reese said, as he began to open up to HBCU Buzz.

“His confidence level as a public speaker has risen and he is able to articulate his thoughts and messages to small and large audiences with ease,” his cousin Donna Williams said.

Dreams take time and the transition from college into the real world is a constant development. For most of life at this point, school is a normal continuous routine. Not rushing into anything he realized that the moment after college was the perfect opportunity to be studious.

“The attributes he had before have grown in strength and has caused a beautiful maturity and resolve,” is the words of cousins Walter and Mahalia Nix as they have paid close attention to Joseph’s matriculation.

He feels as if college prepared him well for the real world because of the courses and interactions he experienced. In result of the places he could travel to along with people he met, he became a better problem solver and understood hierarchy.

Reese has a unique legacy at Huston-Tillotson. Tillotson College and Samuel Huston College merged together in 1952. During his Junior year, he discovered that his grandmother was a student at Tillotson College and her sister a student Samuel Huston. No matter how far away Reese will be from his University, regardless of the many failures, setbacks, and frequent frustrations mixed with moments of joy the feeling of home will never fade.

During the transition from college to the real-world Joseph felt as if the vision he had for himself wasn’t coming to execution. Not being fully indulged in his faith, he blamed self instead of relying on God whole heartedly. College is only a moment in time, and time surely keeps going and freezes for no one.

When asked Joseph what he regretted not doing in his final year of undergrad he stated, “Honestly, I regret taking ‘time’ for granted. I didn’t believe anyone when they said that it would be over so soon; I regret allowing the stress and worries devour my time.”

The one who once worried now consumes positivity and a mindset of being patient.  In this world working in multiple careers require effective code switches and that is a trait that Joseph learned at Huston-Tillotson.

“I use it subconsciously at times because living in the world we are now, being able to converse on various levels could quite frankly save one’s life,” Reese explained.

The blessing of being out of college for Joseph was the ability to look back and understand why everything took place.

Many that surround him are very familiar with his faith. “He reflects a man of Isaiah 40:32, But they that wait upon the Lord shall renew their strength. They shall mount up with wings as eagles. They shall run and not be weary, and they shall walk and not faint,” is what came to mind when Alice Lewis reflected on her cousin’s college transformation.

The goal for Joseph is to become a philanthropist who provides for those in need. This professional musician wants to use his gift and then become a teacher that grooms the same gift of others.