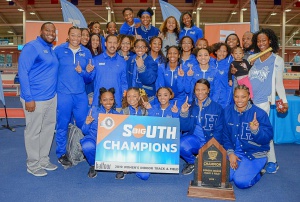 LYNCHBURG, Va. – The Hampton University Lady Pirates indoor track and field team made it a sweep on Saturday as they took their first-ever Big South Conference Indoor Championship in the meet held at Liberty University.

Hampton scored 162.50 points to edge out High Point with 159, while Charleston Southern took third with 95 points.  Campbell finished in the fourth spot with 77 points, Radford finished in fifth with 52, and USC Upstate is sixth with 44 points. Gardner-Webb finished in seventh with 32 points, while Winthrop stands eighth with 21 points and UNC Asheville rounds out the standings at ninth with 18.5 points.

The field events saw Hampton set a couple school marks.  In the weight throw, Hampton went 1-2 and set a school record as Corneisha Mitchell won it in 18.68 meters with Ayana Culhane taking second in 18.27.  Culhane set a school record on Friday in the shot put with a toss of 14.58 meters.

Kameryn Trussell was fourth in the triple jump (11.47 meters) and Smith was sixth (11.30) for eight more points.
In the 4×400 relay, Jaelen Leonard, Smith, Alysha Evans and Hinds took second in 3:51.71 to ice the team win finishing ahead of High Point who was third.

For more information on Hampton University women’s indoor track and field, please contact the Office of Sports Information at 757-727-5757 or visit the official Pirates website at www.hamptonpirates.com