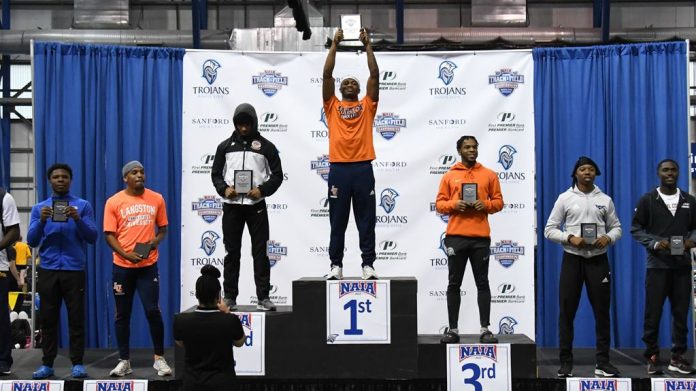 Langston University student Zachaeus Beard has made history at both his HBCU and beyond at a recent championship. Over the weekend, he earned the top spot at the NAIA T&F Championships. The move also earned him a spot at Langston that hasn’t been touched in almost 10 years. In fact, Beard has become the first tracker runner to bring Langston University a national track championship since 2013! Learn more about Beard’s history-making run in the 60M dash and how he found success in the story from Kyle Taylor of Langston Sports Information.

For the first time since the 2013 season, the Langston University Lions returned home for the NAIA indoor Track and Field Championships with a national champion.

Zachaeus Beard won the men’s 60-meter dash and set the meet record with a time of 6.61, breaking the previous national meet record of 6.65 seconds by two different runners (Mike Rodgers of Oklahoma Baptist in 2007 and Kejavon Moore of Indiana Tech in 2018).

Beard became the first Langston University Lion or Lady Lion since 2013 to gain the distinction of national champion. The most recent being David Walters during the 2013 season in the same event, the 60-meter dash.

“This makes me feel so grateful, so thankful. I have so many to thank for my success. Glory Glory Hallelujah! I’m just so happy man, I worked for this,” the junior sprinter said when reflecting on his accomplishments. “I haven’t really understood the magnitude of what I’ve done yet, but they’ve been telling me it’s big! Not only was it big, but it’s only the beginning.”

The sprinting duo now looks to continue their success as Langston transitions to the outdoor season on March 26th at Oklahoma Baptist in Shawnee, Okla.