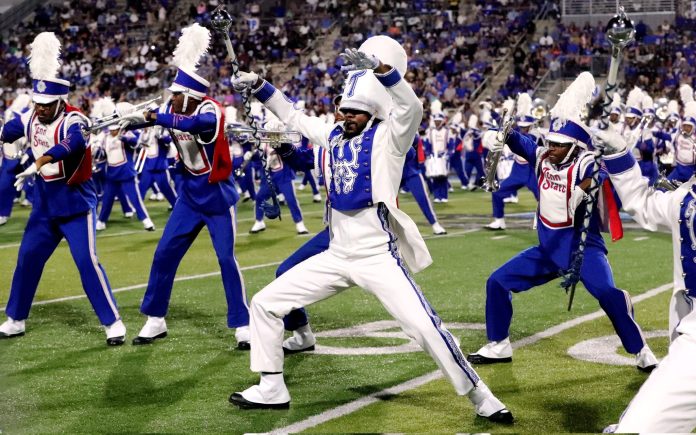 The Aristocrat of Bands (AOB) at Tennessee State University is setting their aspirations high by submitting an application to the Grammys to be nominated for their upcoming album “The Urban Hymnal.”

On Monday, the band announced the news on social media, documenting the moment they hit the submit button. They are vying to win in the category of Best Gospel Roots Album.

If they win, the band would make history as the first collegiate band to receive a Grammy for an entire album.

The Aristocrat of Bands is no stranger to being a band firsts. They were the first HBCU to appear on national television during the 1955 Rams vs Bears NFL game halftime show; the first HBCU to perform at the Presidential Inauguration for John F. Kennedy in 1961; the first HBCU to be appointed by the NFL in 2002 as an official band for the Tennessee Titans, and the first collegiate band to perform for the NFL Hall of Fame Halftime Show in 2014 just to name a few.

This win would be even more special for the AOB as the album was recorded right on the campus of TSU.

“The Urban Hymnal” is set to be released on September 13, as a 10-track album filled with organic sounds that were created on campus.

TSU Senior and Saxophone Section Leader Logyn Rylander expressed her gratitude to News Channel 5 in an interview. “I feel so honored to just be in the presence of such great people, such great geniuses, people who work hard,” Rylander. “I’m so honored, grateful, and thankful for everything they’ve been pouring into us — pouring into me — and it’s going to take me places that I already know: the sky’s the limit for me honestly. Pressing that button, it just solidified my future, solidified the fact that I can do this.

The band recently performed at the 2022 Essence Festival of Culture in New Orleans, which garnered even more attention from the gospel community, according to AOB director Dr. Reginald McDonald.

“And as a result of that performance, so many mega artists within the gospel community have now asked to be a part of the project,” McDonald said.

Sir the Baptist, who received an honorary degree at TSU last spring, said “We will bring back to life some of the hymnals, but in an urban way,” he said. “To have support from so many people and brands, it means a lot and shows us that we are on the right track. “This is really going to change culture.”

“For me to be the band director of Tennessee State is nothing short of divine intervention. This album can do something to solidify the branding of not just the band, but the university for decades”

According to the Tennessee Tribune, McDonald said “This will be the first (album) from us, it won’t be our last.” He said he is grateful to have the ability to transition students, ‘from dreams to reality.’

Grammy nominees will be announced in mid-November, while the awards ceremony is set for February 5, 2023. UAPB to Replace JSU in the Southern Heritage Classic