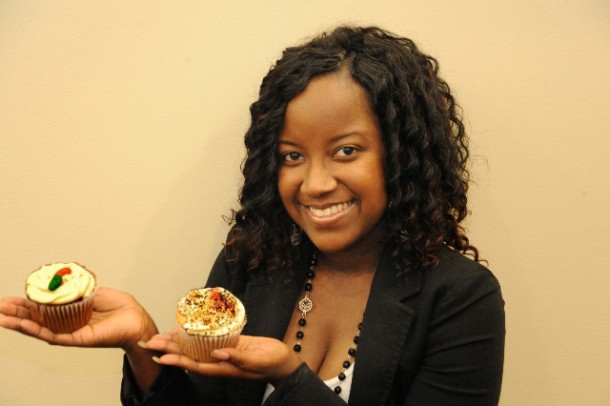 Take a bite into one of Sequoyah Burden’s decadent red velvet cupcakes and you’ll soon discover why the Claflin University senior is making quite a splash with her new bakery in Holly Hill.

A penchant for baking red velvet isn’t Burden’s only culinary forte. In fact, she can make a cake using just about any design or recipe. The menu at Sequoyah’s Sweets is littered with cupcakes like “Oh Oh Oreo”, a chocolate cake covered with Oreo butter cream, or “Bubble Yum”, a sweet yellow cake with bubble gum frosting.

Since the bakery opened this summer, Burden has gotten and fulfilled requests that are not on the menu. For example, a customer wanted to surprise her hunting enthusiast son with a cake featuring the deer logo of the major outdoor supplier Browning. Burden didn’t know of the company but the customer sent a picture of the Browning logo and she made the cake.

The fledging business started in the kitchen of Burden’s mother, Harriette Glenn. “I come from a family of cooks,” Burden said. “During the holidays, I would always be the one to help mom in the kitchen. But I didn’t want to cook. I wanted to bake.”

And bake she did.

Her grandmother, Harriete Brothers, gave her recipe for the red velvet cupcake. She noted it was a struggle initially to replicate the delicious nature of her elder’s red velvet rendition. But Burden eventually nailed it down. It was an accomplishment that signaled to her this could become a lucrative hobby.