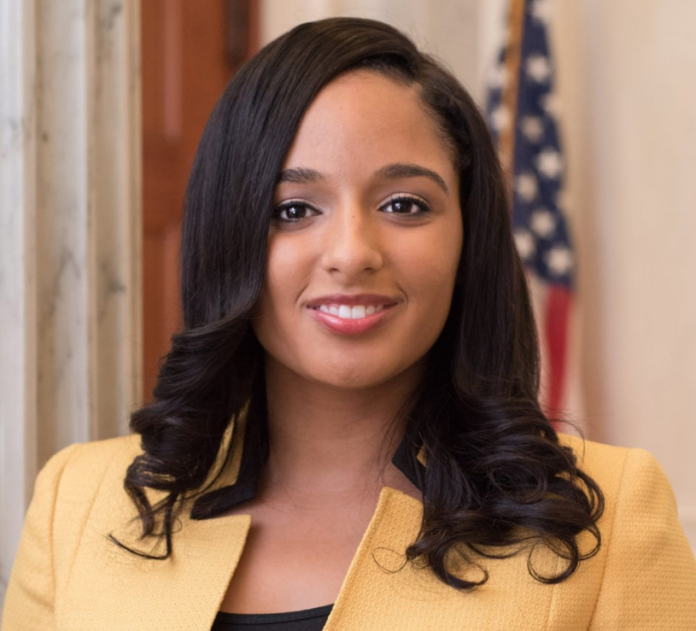 She went from serving her HBCU as queen to now striving to change the dynamics of voter turnout for elections. While in college Smith served as a full-time track athlete, in which she was recognized for All-Conference for the 55 and 100 meter hurdles, a member of the Student Alumni Association, Student Athletic Advisory Committee, Student Government Association, Bowie Broadcast Association, Latino Student Association, National Association of Black Journalists and National Council of Negro Women.

“From Freshmen Year to now Carissa has gained so much confidence in herself. She was a timid jersey girl who then discovered her own independence and bloomed,” her friend Corinthia Jones-Davis told HBCU Buzz.

After walking across the stage for her diploma Smith took the time to enjoy life with no rush to be so many places in so short of a time. One lesson that Smith knew she had to learn prior to graduating is making sure that she served herself for life after Bowie.

“It’s important to spend time mastering life after crown as well as preparing towards the end of your reign for the next step,” Smith explained.

Over the years in the HBCU community, we have seen various student leaders who serve as the face and voice of the student population at their institutions suddenly go under the radar.

Some attempting to find their way in the real world and others transitioning from a public figure to an individual who watches instead of leads; many leaders go through various changes after their term is over. For some, the leadership continues while others enjoyed the moment while it lasted:

“Often times I find that student leaders can get so caught up in these roles and not realize how temporary the title is,” Smith said.

Student leaders have the charge to inspire and uplift other students. Many look to them for advocacy and necessary action for change that is needed. Within this time frame actions towards personal long-term decisions must be made that will affect the student leader for the rest of their life.

Not wanting a “Now What?” feeling after graduating Smith made sure that she got busy her last semester of undergrad by becoming a full-time intern for Senator Robert Menendez (D-NJ) working on legislation for women’s issues.

With over three hundred applicants, Smith was one of the chosen fifteen for the Congressional Black Caucus Foundation Emerging Leaders Program Fall 2016 cohort.

Public Relations Coordinator at American University Armand Hodge can attest to Smith’s work ethic because he has been a witness to her flower of potential blossom since college.

“She is willing to put in the time and dedication to ascend to the next level,” Hodge said.

Now she is currently located in DC working as a communications strategist for The United States Association of Former Members of Congress. The organization serves as a bi-partisan group that works to strengthen Congress and deepens the understanding of the U.S.  democratic system.

The organization works with current members of Congress as well as former members by providing opportunities for congressional research internationally and domestically.

“I still become overwhelmed thinking about how blessed I am to have a job I love and where I feel like I’m making a difference for our political climate,” Smith said.

During her reign, she facilitated fourteen programs, served as president of an organization while interning and being an athlete so free time was rare but the drive was full blast.

She has a goal of returning to school in the fall to pursue her master’s and soon after pursuing her Juris doctorate.

“None the less that drive to never settle is what all student leaders should learn during their positions to prepare for the real world. Don’t settle for one title when you can handle and win them all,” Smith said.

Having humongous goals ahead of her Smith ended a trend of doubting herself once beginning her collegiate experience.

“I used to doubt myself a lot before coming to Bowie State University but now I see that you shouldn’t allow anyone to turn your sky into a ceiling,” Smith said.

Bowie State instilled in Smith that she would pass rather than fail and that is something that she will hold on to for the rest of her life.

The ultimate goal for Smith is to use advocacy to increase turnout amongst the black community for voting purposes and one day becoming a Congresswoman.

“There needs to be more representation on the Capitol Hill that I identify with,” Smith said.

Smith strives to pursue a master degree in public affairs with a drive to attend law school.