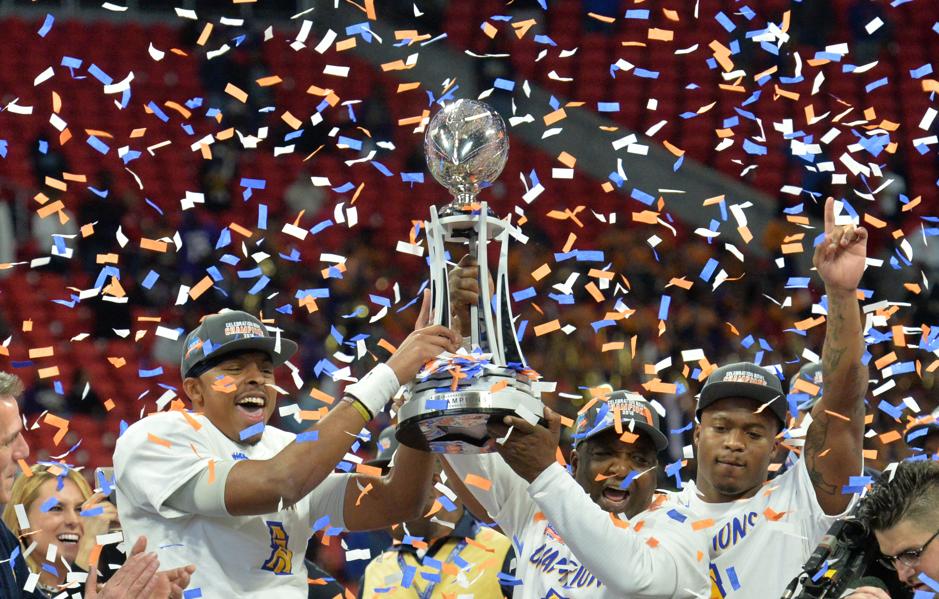 North Carolina A&T continued its Celebration Bowl dominance by defeating Alcorn State 24-22 on Saturday in a rematch of the inaugural game in 2015.

The Aggies improved to 10-2 overall and won their third HBCU national title in the past four seasons. The also retained their Celebration Bowl title after defeating Grambling State last season.

Senior quarterback Lamar Raynard propelled the Aggies with 292 passing yards and a pair of touchdowns.

However, it was another senior who stole the show. Senior return man Malik Wilson sealed the game with a 79-yard kickoff return for a touchdown in the third quarter. The touchdown swayed momentum back to the Aggies and quelled the Braves’ comeback attempt.

“I am happy they kicked the ball to Malik (Wilson),” Aggies coach Sam Washington said. “For the third time this year, when the opposing team got ‘Big Mo’ (momentum) on their side, that young man returned a kick for a touchdown.”

After struggling to move the ball, Alcorn State found some success on the ground. In the third quarter, the Braves erased a 15-point deficit when junior quarterback Noah Johnson scored a 30-yard rushing touchdown.

Johnson rushed for 120 of his team’s 328 rushing yards. He scored two touchdowns, including a 59-yard scamper late in the second half.

As a result, Alcorn State battled back into the game. With 5:55 left, the Braves had one final shot with the ball on their own 28-yard line. The Braves ran five plays, but couldn’t get into scoring range. The Braves ultimately punted it back to the Aggies, where Raynard orchestrated a couple of first downs to secure the victory.

Raynard kept the Aggies in the game early. He hit his stride with touchdown passes to his favorite targets, sophomore Zachary Leslie and junior Elijah Bell. Leslie finished with six catches and 119 yards. Bell also caught six passes for 68 yards.

The trio gave the Aggies a 17-6 lead at halftime. Their play was needed as the Aggies mustered only five yards rushing in the half.

“We knew Alcorn had a great defense as we watched film on them, and they play hard and fast,” Raynard said. “At times, we needed to step up and make plays. We did that as the offensive line protected well.”

Alcorn State finished the season at 9-4. They had chances to find a rhythm early, but couldn’t punch it in. On their second drive, they drove for 84 yards on 14 plays. However, they ended up with only a 29-yard field goal from Corey McCullough. Later in the game, the Braves missed on a two-point conversion that would have tied the score.

“We got to pick up our seniors and let them know that life is going to continue on, and they have to face the real world,” Braves coach Fred McNair said.

Both teams will head home with things to work on in the offseason. They will be primed to make a return trip to Atlanta to play again next season.

“Whenever you win on the national stage like this, it only helps with the kids coming to your program,” Washington said. “We are hoping this opportunity and this platform will increase our recruiting efforts.”

This article was originally published via AJC.com