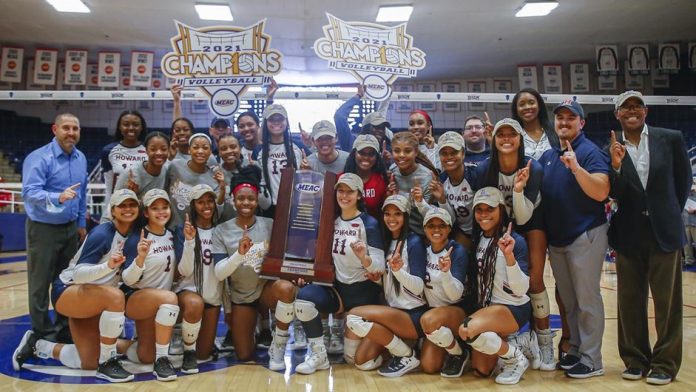 The women’s volleyball team at Howard University just won their 6th MEAC championship in 7 seasons, tying a record with Florida A&M University‘s team! Get the full story from the HU Bison release below.

With the historic victory, HU (18-12) is now tied with Florida A&M for the most volleyball titles in MEAC history (13 total).

The Bison experienced a rocky start in set one with five service errors, but found some momentum throughout game one. But ultimately, HU lost the first set, 20-25.

Kills from C. Woodard and Dami Awojobi (Hempstead, N.Y.) thrusted the Bison to an 18-12 lead midway through the set, before Delaware State was forced to call a timeout.

A kill from MEAC Rookie of the Year Bria Woodard (Missouri City, Texas) then gave the Bison set point (24-21). Next play, an attack error from DSU sealed the game, 25-21, and tied the contest at one apiece. B. Woodard produced a double-double (11 digs & 10 kills), along with a pair of service aces, in the win.

The Bison took control in set three, starting with a kill by C. Woodard to open the set. A pair of service aces from senior Busisiwe Banda (Cedar Park, Texas) gave the Bison a 17-9 lead midway through the game.

After a DSU service error, the Bison moved to within one point of set point. The Hornets forced six set points, but another service error allowed the Bison to claim set three, 25-20.

In set four, Howard lost momentum in the beginning and trailed early, 2-6; however, a service ace from B. Woodard helped HU tie the game, 7-7. With a block from C. Woodard and Awojobi, the Bison kept the set tight early, 9-9. HU finished with 13 total blocks in the match.

After finding the first lead of the set with a kill from C. Woodard, the Bison then went on cruise control and captured set point and match point after a solo block from C. Woodard (25-20).

Senior Kailyn Williams (Arlington, Texas), who played her final match at The Burr, added nine kills and two digs in the victory.

“We dropped the first set and learned from our mistakes,” said Williams. “We knew the last three sets that we had to take of business. We fought and gave so much energy. We went for it and came away champions.”