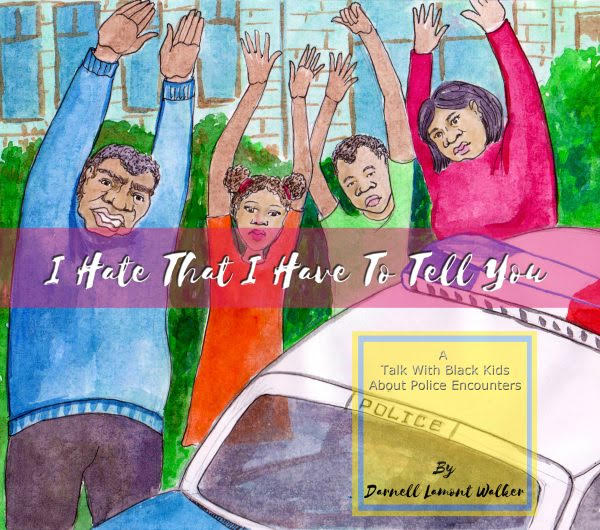 Children all over this country are terrified as a result of black men being killed at the hands of police officers. Bethune-Cookman alum Darnell Lamont Walker recently wrote an incredible book on how to have “the talk” with your children.

Walker held a conversation with his 11-yr-old son Darnell, after he went through a terrifying nightmare about being attacked by police. Having to explain various situations involving police and black men Walker became inspired to write a children’s book that helps children cope with police brutality and what to do if encountered by police. With the last few incidents of black men losing their life to police, Walker has made the eBook version of his children’s book I Hate I Have To Tell You free.

The book is a family affair discussing what to do when handling a cop.  Walker has had his share with police so he has reflections that he can shift to in relating the book to children.  It was because of an incident that took place when he was 9-yrs-old that changed the way he viewed police for the rest of his life. When I was playing tag with my little cousin the police stopped me and held me for 30 minutes, questioning where I lived, with who, why was I running and it scared me,” stated Walker has he remembered the terrifying day.

Many black families, unfortunately, have this talk with their children but it goes far beyond respectability and politics. Families teach their children to put their hands up but in recent incidents like the death of Terence Crutcher, putting your hands up while obeying the police commands still ends in death.

The artwork of the book was brought to life because of an artist donating pictures to illustrate Walker’s life with Charles HF Davis creating the foreword and Deonte Staats creating the afterword.

Walker wants children to learn countless ways to avoid being killed by police.

The resolution of black society problems goes back to the quote from the mother of Emmett Till from years ago.

One question that Walker will never forget is when his son asked him, “What would you do if a cop killed me?”  All Walker wants the book to do is inspire critical thinking and deeper conversations between parents and their children.

A few years ago Walker almost became the next black male whose name flashed across the TV screen. “I was held at gunpoint by police in Daytona Beach simply for being black.” He recalls his arms being stretched out and his legs moving helplessly as he laid on the hard ground.  “One police officer had a gun on my friend’s head. We watched them lie and pull the entire police department along with the mayor into the situation.”

Questioning the existence of life is one of the last questions a caring parent wants to hear pertaining to their child.  This book stirred tension in a few.  Walker heard many arguments as to why a book at the capacity he created is not meant for the shelves for children.

“I’ve had white and black folks say, “You’re making all cops look bad” and “you’re trying to instill hatred in children toward cops” and “the gap is already wide!” And of course “I bet you won’t Write about black on black crime.”

You can check out the book for free here.

How the HBCU Experience Prepared Me for Ivy League School, Life